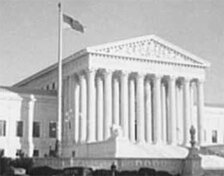 THE SUPREME COURT came under attack by President Roosevelt because it declared important parts of the “New Deal” unconstitutional. FDR’s “court-packing” scheme contributed to the resumption of economic depression in 1937.
Library of Congress

Roosevelt next signed into law steep income tax increases on the higher brackets and introduced a 5 percent withholding tax on corporate dividends. He secured another tax increase in 1934. In fact, tax hikes became a favorite policy of Roosevelt for the next 10 years, culminating in a top income tax rate of 90 percent. Sen. Arthur Vandenberg of Michigan, who opposed much of the New Deal, lambasted Roosevelt's massive tax increases. A sound economy would not be restored, he said, by following the socialist notion that America could "lift the lower one-third up" by pulling "the upper two-thirds down."[28] Vandenberg also condemned "the congressional surrender to alphabet commissars who deeply believe the American people need to be regimented by powerful overlords in order to be saved."[29]

Alphabet commissars spent the public's money like it was so much bilge. They were what influential journalist and social critic Albert Jay Nock had in mind when he described the New Deal as "a nation-wide, State-managed mobilization of inane buffoonery and aimless commotion."[30]

Roosevelt's Civil Works Administration hired actors to give free shows and librarians to catalog archives. It even paid researchers to study the history of the safety pin, hired 100 Washington workers to patrol the streets with balloons to frighten starlings away from public buildings, and put men on the public payroll to chase tumbleweeds on windy days.

The CWA, when it was started in the fall of 1933, was supposed to be a short-lived jobs program. Roosevelt assured Congress in his State of the Union message that any new such program would be abolished within a year. "The federal government," said the president, "must and shall quit this business of relief. I am not willing that the vitality of our people be further stopped by the giving of cash, of market baskets, of a few bits of weekly work cutting grass, raking leaves, or picking up papers in the public parks." Harry Hopkins was put in charge of the agency and later said, "I've got four million at work but for God's sake, don't ask me what they are doing." The CWA came to an end within a few months but was replaced with another temporary relief program that evolved into the Works Progress Administration, or WPA, by 1935. It is known today as the very government program that gave rise to the new term, "boondoggle," because it "produced" a lot more than the 77,000 bridges and 116,000 buildings to which its advocates loved to point as evidence of its efficacy.[31]

With good reason, critics often referred to the WPA as "We Piddle Around." In Kentucky, WPA workers catalogued 350 different ways to cook spinach. The agency employed 6,000 "actors" though the nation's actors' union claimed only 4,500 members. Hundreds of WPA workers were used to collect campaign contributions for Democratic Party candidates. In Tennessee, WPA workers were fired if they refused to donate 2 percent of their wages to the incumbent governor. By 1941, only 59 percent of the WPA budget went to paying workers anything at all; the rest was sucked up in administration and overhead. The editors of The New Republic asked, "Has [Roosevelt] the moral stature to admit now that the WPA was a hasty and grandiose political gesture, that it is a wretched failure and should be abolished?"[32] The last of the WPA's projects was not eliminated until July of 1943.

Roosevelt has been lauded for his "job-creating" acts such as the CWA and the WPA. Many people think that they helped relieve the Depression. What they fail to realize is that it was the rest of Roosevelt's tinkering that prolonged the Depression and which largely prevented the jobless from finding real jobs in the first place. The stupefying roster of wasteful spending generated by these jobs programs represented a diversion of valuable resources to politically motivated and economically counterproductive purposes.

A brief analogy will illustrate this point. If a thief goes house to house robbing everybody in the neighborhood, then heads off to a nearby shopping mall to spend his ill-gotten loot, it is not assumed that because his spending "stimulated" the stores at the mall he has thereby performed a national service or provided a general economic benefit. Likewise, when the government hires someone to catalog the many ways of cooking spinach, his tax-supported paycheck cannot be counted as a net increase to the economy because the wealth used to pay him was simply diverted, not created. Economists today must still battle this "magical thinking" every time more government spending is proposed — as if money comes not from productive citizens, but rather from the tooth fairy.