Destroying the Environment to Save It: The Sad Saga of Richard and Nancy Delene 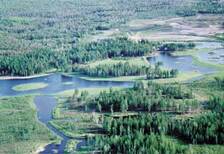 One view of the wetlands created by Richard Delene. Delene used to create projects just like this one as a contractor for-profit. Now he is under orders from the state to destroy the one he has created at his own expense. The cabin where the Delenes had hoped to commune with nature in their retirement years is in the background.

Editor's Note: The following is an update on "environmental outlaws" Richard and Nancy Delene, whose story of regulatory abuse at the hands of the state of Michigan has been chronicled in several previous issues of Michigan Privatization Report (see, e.g., fall 1996, "Private Wetland Developers: First Visionaries, Now Fugitives" and winter 2000, "Land Management: Incentives Matter," both available at www.mackinac.org).

Twenty-five years ago, a native of Michigan's Upper Peninsula had a vision. On a large tract of land in the UP's Baraga County, he would create a dynamic system of ponds and wetlands that would attract and support a rich array of waterfowl and other wildlife. The land Richard Delene and his wife Nancy chose had highly acidic soil supporting a largely valueless scrub forest and little wildlife. 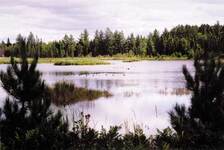 Delene designed each pond to have at least one island to ensure the safety of migratory waterfowl. Natural predators, such as the fox, are less likely to chase after ducks safely ensconced on an isle with 360 degree views.
More images …

Delene earned a living as a "dirt contractor" who specialized in preparing building sites, constructing roads, and implementing "wetlands mitigation projects" for state agencies in Michigan and Wisconsin. (Wetland mitigation projects were designed to construct wetlands in one area to offset "natural" wetlands that were lost due to state road or other construction.) Ironically, many of the projects Delene put together included the creation of the kinds of ponds he would create on his own land-ponds state officials would order him to destroy years later.

Over a 15-year period, the Delenes accumulated 2,500 acres of land. By the mid-1980s Richard had begun a project he knew would occupy him for the rest of his life. With permits from the U.S. Army Corps of Engineers, which then had authority within Michigan to administer the federal Clean Water Act, he began construction of three ponds, removing the thick mat of decaying vegetation that trapped the water below the dry, almost arid surface. He also built a two-story log home, nestled in the trees near one of the ponds.

By the spring of 1991, Delene was prepared to move forward with the more ambitious phases of his project, including construction of a 90-acre shallow pond to provide nesting habitat for waterfowl. He applied for permits to the Michigan Department of Natural Resources (DNR), which had acquired permitting authority under a compact between the state of Michigan and U.S. Environmental Protection Agency.

And he waited. When the statutory 90-day period for action by the DNR had passed, his local attorney advised him that the permits had been awarded by act of law by default because the time had run out. State law says that if a permit is not denied within 90 days, then it is awarded by default (or by act of law). So, in the fall of 1990, Richard Delene began construction.

A year later the state of Michigan issued a cease-and-desist order, demanding that he halt the project. And a year after that, in November 1992, the DNR filed suit in Lansing, charging Delene with violating the state's Wetlands Protection Act and numerous other statutes.

Because the DNR filed a civil suit as opposed to a criminal suit, Delene had no right to be judged by a jury of his peers. In addition, the action was brought not in Baraga County, but in Lansing, 500 miles from Delene's home. Because Delene and his local lawyer could not afford the expense and time associated with travel to the Lansing court, Delene was forced to retain a Lansing-area lawyer with whom he had no previous relationship. Unfortunately, despite reminders by Delene and his UP lawyer, this new lawyer failed to file the required reply to the complaint within the time permitted and Delene was found guilty by default.

Almost a year passed before Delene was able to find another Lansing attorney to take over his case. In the meantime, the court issued a bench warrant for his arrest for violating court orders of which he was unaware, and he and his wife were forced to flee the state to avoid arrest. Only after his new attorney appeared in court was the bench warrant canceled, permitting the Delenes to return to Michigan.

To pay their legal bills, the Delenes, by no means wealthy, were reduced to selling logging rights to the small portions of their land that had timber. In other words, in the name of protecting natural habitat, the government had forced a family concerned with such protection to deface the natural habitat.

Delene had ample evidence to present in his defense. Whitewater Associates, a consulting firm highly respected by environmental groups in the state, had found that his project significantly enhanced the environment, including the wetlands' environment. Civil-engineering professors at Michigan Technological University concluded that virtually all of the state's claims of environmental damage-for example, its accusation that the Delene project had resulted in serious sedimentation of the Sturgeon River-were entirely without foundation, calling into question the professional competence of the DNR's staff "experts."

But none of this mattered. The court might have been asked to set aside the conviction-by-default and hear the case on its merits. But, the first attorney decided, to the astonishment of the judge, that the default "doesn't mean that much," and the second of Delene's attorneys delayed filing the necessary motion, despite Delene's repeated requests that he do so. When the motion to set aside the default was finally filed, the judge ruled that it was simply too late.

Shortly before the commencement of court proceedings to determine the sanctions to be imposed for Delene's guilt-by-default, Delene's second attorney was permitted by the court to withdraw from the case. This was significant for two reasons: first, it left Delene without representation at a critical phase of the proceeding. Second, it set the stage for the second attorney's later suit against Delene. A third attorney was retained. Again a motion to set aside the default was denied by the court. And when the penalty hearings began, Delene's attorney was not permitted to present witnesses who could establish that Delene was not even guilty, simply because Delene had already been adjudged guilty by default.

In the meantime, the court had again found Delene in contempt for refusing to take interim actions demanded by the DNR, the consequences of which Delene and his advisors were convinced would be environmentally harmful.

In May 1997, the court issued its judgment. It ruled that the Delenes had to pay $1.3 million in fines, destroy those parts of the wetlands project that had been completed, and refrain from taking any further action without the express permission of the Department of Environmental Quality (DEQ), the successor to the Department of Natural Resources.

Under the court's judgment, Richard Delene was to retain a licensed engineer to oversee the mandated "restoration." Delene did so, and the engineer studied the judgment and surveyed the site. He then submitted a letter of resignation to Delene's attorney, on grounds that he did not want to be associated with an environmentally destructive project.

To add insult to injury, the second of Delene's attorneys filed suit (in Charlotte, near Lansing) for what he claimed were unpaid legal bills. Because Delene could not be located, he was "served by publication" in the Lansing State Journal, failed to respond, and was again found guilty by default.

Although this second attorney had represented Delene for less than 18 months, a period over which relatively little had actually happened in the case, and had been paid about $30,000, he suddenly claimed unpaid legal bills of $119,000. Financially devastated by a then eight-year battle with the state, Delene was unable to pay his lawyer, the state fines, or the cost of "restoring" his property to the sterile condition it was in when he began the project, as the state demanded.

Ironically, the Delenes' former attorney, seeking restitution, has won a sheriff's deed to the land on which Delene had hoped to build his own Garden of Eden. For over two years the attorney has held title to the property. Over this period the DEQ took no action to enforce its restoration order (that is, to return the Delenes' wetlands to their original state).

In September 2001 the DEQ asked that the court allow the state to pursue the attorney as a defendant in its action against Delene. The state's transparent objective is to seize all property owned by Delene in 1992, when the state commenced its action against him. In order to accomplish this goal they must strip the attorney of his deed to the Delene property. In addition, it must take property deeded to the Delene children by their father. The state has signaled its willingness to do so.

The marriage of the state's high-flown environmental values and the perverse incentives under which it operates leads to every sort of mischief. The state needs to examine the way it enforces its environmental laws to ensure that individual property rights are accorded more respect, lest the Delene case become a rule for state action, rather than a tragic exception.