Government Should Mind Its Own E-Business 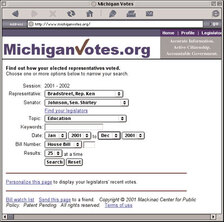 Broadband facilitates quicker Internet access to popular websites. Ironically, officials and citizens may use broadband built without state assistance to track LinkMichigan's status with websites such as www.MichiganVotes.org. Michiganvotes.org is a new site designed to track legislation and the voting records of Michigan legislators.

Over the past several years, the Internet has helped to unleash a revolution in commerce, bringing producers and consumers together from almost anywhere on the globe. Most of this new economic activity generated by online "e-business" has happened with little or no government involvement. But the Michigan Economic Development Corporation (MEDC) is looking to change that.

In May 2001, the MEDC released "LinkMichigan," a report that claims the state's telecommunications infrastructure has a number of problems that may place citizens and businesses behind in the competitive race unfolding in the high-tech economy. To remedy these problems, the report makes four recommendations for state involvement in the Internet access business, particularly in the more rural parts of Michigan.

To the MEDC's credit, "LinkMichigan" cites the failed efforts of other states to take a hand in the transition to broadband.

It is not clear, however, that there is anything wrong with Internet access in Michigan. Nor is it likely that government involvement could do a better job of wiring the state than the free market is already doing on its own. An analysis of present market realities and each of the report's four recommendations even suggests the opposite: Government involvement could actually backfire and create more, and more serious, problems than those it seeks to address.

The MEDC's "LinkMichigan" report cites two major problems with the state's broadband telecommunications infrastructure: congestion and a lack of access.

It's true that most users, at one time or another, have known the frustration of electronic traffic congestion, which slows access to the Internet and sometimes denies it altogether. But Internet congestion isn't a rationale for government intervention; it's a rationale for converting to high-speed "broadband" technologies, including cable and DSL modems. To cite Internet congestion as a reason for government intervention is like saying that back when Michiganians were making the transition to automobiles, the government, not Henry Ford, should have addressed the problem. The reason: Horses are too slow!

The "problem" with Michigan's telecommunications infrastructure is that a lot of users still use phone lines to connect to the Internet. But all of any state's infrastructure used phone lines for Internet connection until more people switched over to broadband. Before the automobile completely replaced horse-drawn transportation, many people in Michigan still used horse-drawn transportation. That isn't a reason to call the government. It's a reason to call Henry Ford.

The second area of concern identified by the MEDC's report is that adequate broadband service is not available in all locations across the state, especially in rural areas, and that "not having readily available broadband access will increasingly be seen as unacceptable." Once again, this is like saying the government needs to take over the automobile industry because not everybody has a car yet.

The MEDC report notes that individuals who live in rural areas are underserved by the current providers of broadband technology. But the same argument applies to any other economic activity. Businesses provide goods and services only when it is profitable to do so, and that is precisely why Meijer Thrifty Acres and Home Depot are located near population centers. People who choose to live in rural areas give up convenient access to the many things that individuals living in the city enjoy, in favor of a less congested lifestyle. This voluntary tradeoff is evidence that the market is functioning in a reasonable and efficient manner.

The data published by the FCC in "High-Speed Services for Internet Access: Subscribership as of December 31, 2000," shows that in terms of the number of providers of high-speed lines, Michigan ranks 11th among the 50 states, with 15 providers. The only states to have more providers than Michigan are, not coincidentally, those with larger populations needing service. The marketplace is simply responding in a reasonable way to different levels of demand in different areas. The MEDC wants to disrupt that process.

In terms of the number of high-speed lines, Michigan ranked 10th among the states. According to the "Statistics of Communication Common Carriers," a respected FCC publication, there were 1,105,638 kilometers (or 687,043 miles) of total fiber-optic cable deployed in Michigan as of December 1999.

Does the State Have the Answers?

The MEDC proposes four steps to solve Michigan's alleged telecommunication infrastructure problems, but each raises additional problems that could be costly to Michigan citizens.

The report's first recommendation is to "aggregate public demand." That is, the authors believe the state of Michigan should purchase advanced telecommunication services for local businesses and residents. But purchasing a one-size-fits-all system presumes that the state knows what is best for everyone. The practical problem of determining the specific demands of thousands of Michigan customers is likely to offset any benefits this initiative would deliver. Consumers, after all, are a diverse lot and many want custom features or have different needs.

To the MEDC's credit, "LinkMichigan" cites the failed efforts of other states to take a hand in the transition to broadband. In Iowa, the state has tried to sell its new fiber-optic network, but no private vendors want to buy it because the arrangement the state has put together is not financially feasible. In Minnesota, a utility developer had agreed to build a fiber-optic network at its own expense, but has recently withdrawn from the project, citing financial difficulties. These are simply the kinds of financial difficulties one has come to expect when government gets involved in economic matters for which it lacks sufficient knowledge or expertise.

The report's second recommendation urges the state Public Service Commission, which regulates utilities, to implement a single tax-and-regulatory system that will pre-empt the many local regulations implemented by counties, towns, and villages. This is probably the hardest issue to address, and "LinkMichigan" makes valid points about Michigan's patchwork of local regulations and fees being a hurdle to broadband infrastructure development. But Michigan is a "home-rule" state and any attempt by Lansing to usurp local authority on this issue likely will be met with fierce resistance. A better solution would be to simply eliminate any regulation that is likely to impede entry into the broadband market. This would send a strong message that Michigan welcomes any and all businesses willing to compete to serve Michigan consumers.

The report's third recommendation is for the MEDC to work with "local partners" to formulate rules and regulations that would require service providers to report their network location and network capability to prospective customers. Although such a regulation is redundant in a competitive market, it will likely increase prices for consumers since the additional cost to comply with the regulation will be passed on by Internet service providers.

A fourth recommendation is for the MEDC to offer community grants to assist local leaders in developing their connections to the Internet. This proposal raises many more questions than it answers. For example, where will these funds come from? What will be the criteria for distributing the grants?

The MEDC's concern that Michigan is falling behind in the development of its high-speed telecommunications infrastructure is overstated. Michigan ranks as high in broadband access as its population would dictate that it should.

The best possible course of action is for state policy-makers to step aside and let free people decide how they wish to access the Internet.