When Privatization Comes to Town: What's New in Hamtramck? 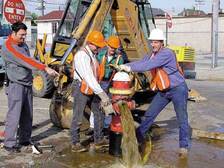 It's been one year since Gov. Engler appointed retired banker Louis Schimmel as Emergency Financial Manager of the fiscally troubled Wayne County city of Hamtramck.

Schimmel's efforts to turn the city around over the last 12 months provide a textbook lesson on how privatization done right can be a powerful budget management tool and service enhancer for municipalities.

But first-how did debt-ridden (to the tune of $2.4 million) Hamtramck get into such dire financial straits to begin with?

One reason was poorly negotiated contracts with city employees' unions- contracts that failed to establish a strong link between job performance and pay levels. For example, Hamtramck's contract with the American Federation of State, County, and Municipal Employees (AFSCME), the union that represents city clerical and Department of Public Works (DPW) employees, provided for wage increases of 13 percent over a three-year period, significantly higher than the 3-percent rate of inflation. Furthermore, AFSCME-represented city employees, depending on their length of employment, were entitled to up to 40 paid vacation days a year. These employees also enjoyed up to 15 paid sick days, 13 paid holidays, 3 paid emergency leave days, 3 paid personal days, and 1 paid day for their birthdays.

In other words, in exchange for generous time off and guaranteed, comfortable raises each year, unionized city employees were providing too little work.

Without the right incentives, city employees neglected their jobs, sometimes to the point of threatening the health and safety of citizens. For example, garbage was in many instances not picked up for as long as seven weeks, dramatically increasing Hamtramck's population of rats and other disease-carrying scavengers and pests.

The city's DPW also suffered from poor equipment, inadequate supplies, and lax supervision. In addition, the city had 95 fire hydrants that were either nonworking or in need of repair, and DPW expertise did not include a knowledge of how to fix them. To make matters worse, Hamtramck officials were prohibited by union contracts from subcontracting out any work, including fire hydrant repair and garbage collection.

When Schimmel took over, he negotiated a new contract to provide for privatization of all DPW work and also allowed all current employees to either accept a buyout or remain employed in the DPW until they retire or leave the city for other reasons. Currently, there are only eight employees left in the DPW. This arrangement has allowed the city to contract out trash pickup, fire-hydrant repair, and nearly all other services provided by the DPW.

And services have improved dramatically. Hamtramck now outsources vehicle repairs, tree trimming, snow plowing, street repairs, water and sewer line repairs, and various other DPW services. A street sweeper purchased by the city on a lease contract was returned and the remaining payments canceled. The city held an auction Oct. 10 to sell city-owned vehicles and equipment no longer needed by the DPW. Every one of the 279 items up for sale was sold, generating $215,286.

Before the takeover, Hamtramck owned a fairly large amount of untapped capital in the form of land. Attempts were made to sell portions of it before Schimmel's appointment, but deals were never consummated. Under Schimmel, the city has leased land for a cell-phone tower location and is selling other land to local commercial enterprises. The lease of land for a cell-phone tower will generate $26,000 annually for the city of Hamtramck.

Before Schimmel arrived, the city operated a parking-meter system that was in a constant state of disrepair. A large number of meters were not working and parking enforcement was almost nonexistent. The system has been the subject of scandal, with allegations of money being stolen from the meters. City parking lots were in disrepair as well. When Schimmel took over, the city signed a lease with its own Downtown Development Authority (DDA) to provide for the operation of the parking system.

In addition, Schimmel has re-negotiated police and fire personnel contracts that had been overly generous (annual pay hikes of nearly 10 percent per year for police officers, for example). Schimmel had considered outsourcing police services to Detroit or Wayne County, but changed his mind when he was able to secure adequate concessions from the police unions. Wage hikes in the new contracts were adjusted to be more in line with inflation, departments were reorganized, and 15 positions were eliminated. Annual savings amounted to $1.6 million.

On the Road to Recovery

Altogether, privatization under Schimmel-including both asset divestiture and outsourcing-has saved Hamtramck $1.5 million annually so far and put the city back on the road to financial recovery. Poor quality services, and services that simply weren't being performed, also have improved dramatically.

It is unfortunate that Hamtramck's mayor and city council had to be temporarily stripped of their governing power in order for the state to get the city's finances in order. But it is not surprising. Long-term refusal on the part of municipal leaders to recognize long-known principles of economics and human nature can have dire consequences. Other cities should pay close attention to Hamtramck's ordeal, lest they be condemned to repeat it.