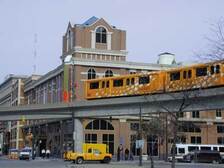 The Detroit People Mover passes the Greektown Casino in downtown Detroit. How long will Detroit subsidize this service?

In November, the citizens of Detroit will elect a new mayor to preside over one of America's most decayed urban areas: a municipality steeped in debt, high taxes, and poor services. Regardless of who they choose for this honor, fed-up Detroiters should insist that the new mayor consider privatization of assets and services as a way to give the Motor City the financial and cultural tune-up it so desperately needs.

Consider a few facts the new mayor will need to deal with upon assuming office. The city of Detroit:

What to tackle first? Here are a few suggestions:

Cobo Conference and Exhibition Center: Since 1980, Cobo has cost the city of Detroit an average of $9.1 million per year to keep in good repair. That comes to $182 million in 20 years. Cobo should be entrusted to the private sector, a move that could earn the city a one-time sales payment of at least $50 million and generate another $1.9 million in property taxes annually. At a minimum, Detroit should contract with a private firm to manage the facility for less, as Riverside, Calif., and Denver, Colo., have successfully done with their convention centers.

Department of Public Works: Duties performed by this department could be outsourced in whole or in part. Shaving just 20 percent from the cost of running Detroit's DPW would save residents more than $28 million annually. In fact, Detroit already knows the kind of savings it can realize in this way: In 1998, the DPW privatized oil changes for police vehicles. Savings figures haven't been announced, but the Mackinac Center for Public Policy calculates that if all 500 police cars get their oil changed 10 times yearly with a private vendor, the cost would come to roughly $165,000. That's an astounding 83.5 percent drop in the cost the city previously incurred to perform this operation.

Belle Isle: How long will Detroiters permit their crown jewel to be neglected by poor city services? The city should hand over the entire 985-acre island park to a nonprofit corporation, just as was done successfully with the Detroit Institute for the Arts. Some mayoral candidates have, to their credit, considered this "nonprofitization" idea, one that could relieve the city of its annual Belle Isle appropriation, the latest of which topped $5.5 million.

People Mover: The most recent subsidy for this sparsely used transportation service was $11.4 million, a substantial sum that could be better directed to other needs if Detroit simply closed down this boondoggle.

Public Lighting: There is no reason for the city to run its own power plant. Investor-owned utilities are more than capable of serving Detroit's needs, and for less. Utilities usually sell for 1.5 to 2.5 times their equity (that is, assets minus liabilities). If this were the case for Detroit's power company, a sale could fetch $300 million and relieve Detroit of management headaches, including appropriation of an annual subsidy, which is expected to top $10 million in the 2001-02 fiscal year.

Detroit is full of talented and caring people who are waiting for a leader to trim the suffocating municipal bureaucracy so they can unleash their creative entrepreneurial powers to build better lives for themselves, their families, and their communities.