If You Wear Eyeglasses, Raise a Toast in Memory of George Joseph Galic 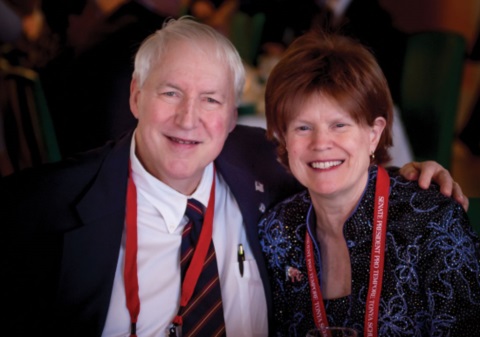 The Mackinac Center for Public Policy has been blessed with many kind supporters. In March we lost one half of an outstanding pair to cancer.

George Joseph Galic passed away at age 76 in March. Born in Chicago, George was raised in Iowa and earned a bachelor of science degree in chemical engineering from the University of Iowa. In 1966 he was hired by the Dow Corning Corporation in Midland, Michigan, where he would meet his future bride, Mary Ann Tompkins, who was working as a teacher for Midland Public Schools.

The pair were close partners in life until George’s passing, and they made philanthropic contributions to organizations they believed could most effectively advance a betterment of society. “We looked to support organizations that defended and advanced the values we shared,” said Mary Ann. These included veterans groups and those supporting child and family services, as well as Hillsdale College and the Mackinac Center.

George formed his own engineering business in 1984, which played a played a key role in the development and spread of lightweight, scratch-resistant eyeglasses, benefiting millions of people. More than 80% of all polycarbonate ophthalmic lenses produced worldwide come from companies he either issued a license to or headed up during their start-up phases. In his long career, he obtained, along with a co-inventor, 22 patents in the United States and even more foreign equivalents.

Mary Ann taught in public schools, first in Midland, and then in Pennsylvania. She later moved with George to Minnesota, when a business opportunity appeared for him. She took on the challenge of becoming a computer programmer, analyst and ultimately a network manager at Minnesota Mutual Life. Once George founded his engineering business, however, she dedicated herself to helping it succeed.

She was raised by parents who helped shape her own views on matters of public policy, thanks to the emphasis they put on personal responsibility and market capitalism. “You build your own life” is one conclusion she drew from their teachings. Her father served as mayor of Traverse City, and her mother retired as the assistant superintendent of finance for Traverse City Area Public Schools. Together they built a legacy that included charitable work that continues to this day, a pattern George and Mary Ann emulated.

Both George and Mary Ann viewed their own successes as resulting from hard work, personal sacrifice and responsible choices throughout their many years together. After selling the business in Minnesota, they moved to Traverse City. As the two were winding down their still-challenging work lives, George was appointed to a seat on the Traverse City Public Library board, where he worked to right the library’s financial ship and expand its offerings. He and Mary Ann officially retired from his engineering business in 2013 but then expanded their philanthropic work.

“We support the Mackinac Center because they bring together the expert resources to promote our beliefs in free markets and to fight for government transparency,” Mary Ann said.