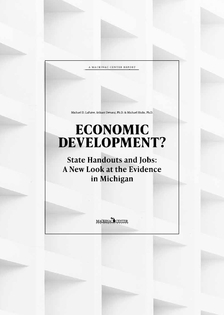 A new study from the Mackinac Center, “Economic Development? State Handouts and Jobs A New Look at the Evidence in Michigan,” shows that some state economic development programs create jobs. But as the Aug. 13 report reminds us, they come at large cost when measured in incentives offered per job per year.

To research the economic development impact of incentives such as cash grants, tax abatements and credits, and low-interest loans, the Mackinac Center built a database of state incentive deals. We mined data from nearly 50 state reports, which cover dozens of programs that go back to 1983.

Our database ultimately covered more than 7,300 deals. We then purchased what has been described as a census of American business that tracks employment and sales at firms offered incentives by the state. Our next step was, to the extent that we could, find companies that appeared in both databases. The search gave us 1,890 companies, though we later added 400 companies for a related but different analysis. This allowed us to compare the track record of firms that were offered incentives by the state with like firms that were not and then see how each type did in creating jobs.

What we found was that subsidized firms did indeed add jobs to their payroll, and at a higher rate than their unsubsidized rivals. But this came at a cost of incentives offered of nearly $600,000 per job per year on average, a staggering figure.

The state could probably do better for the economy by just dropping money from a helicopter. There are even better options, though. It could eliminate existing corporate welfare programs in favor of cutting the personal income tax or dedicating the money to filling potholes or budget holes. Even when today’s bank interest rate is near 0%, saving the money for a rainy day would likely be a better use of scarce resources.