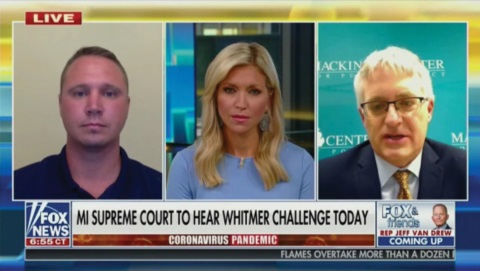 The 2020 election season is in full swing, and it comes with new opportunities to combat outlandish policy ideas. In the wake of the Democratic National Convention, our director of environmental policy, Jason Hayes, wrote a piece detailing what a Biden-

Harris presidency would mean for energy policy. As he describes in the op-ed, which was published in The Hill, “the former vice president and California senator have both committed themselves to heavily restrict fracking as they focus on climate change and renewable energy. If enacted, the Biden-Harris plan would reduce energy choices, increase prices and drive Americans back to international markets for essential energy supplies.”

The release of a new study that examines Michigan’s corporate welfare programs over the last few decades provided our fiscal team plenty of opportunities to comment in news outlets. Op-eds that highlighted the ineffectiveness and cost of the various programs were published in The Detroit News, The Alpena News, Grand Haven Tribune, The Daily Telegram, The Monroe News and Crain’s Detroit Business. On the education front, we received a wave of media attention about our recent update to the superintendent salary database. The database gives parents, lawmakers, media and education officials an easy way to see how tax dollars are spent on school district leadership. Local papers, television outlets and radio stations used information from the database to produce localized stories.

As our cover story explains, the Michigan Supreme Court issued its decision on our lawsuit challenging Gov. Gretchen Whitmer’s executive orders. Prior to oral arguments, an op-ed from one of our clients appeared in USA Today and affiliated newspapers across the country. As he writes in the piece, “It’s too late to undo most of the harm that these orders have caused. But it’s not too late for the Michigan Supreme Court to do what’s right.” Thankfully, the court agreed.

We hosted a virtual press conference featuring Patrick Wright, vice president of legal affairs, and two of our clients in the suit. It was well-attended by reporters representing every major outlet across the state. Stories about the oral argument and the decision appeared in every outlet in the state and n hundreds of outlets across the country. Wright and our clients appeared in front of a national audience on Fox and Friends on the morning of oral arguments and following the decision. Notably, the Monday after the decision came down, a Wall Street Journal editorial called the Mackinac Center the “legal firepower” behind the case.