Joe Lehman: From the Farm to the Policy Table 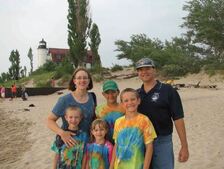 Lehman's family, when his children were young

It’s a long way from being part of the 2,000-person farming and coal mining town of Marissa, Illinois, to being president of one of the largest state-based think tanks in the country. But Mackinac Center President Joseph Lehman made the trip.

Lehman left his family’s farm to attend the University of Illinois, where he earned an engineering degree and met his wife, Karen. They were then both hired as engineers at Dow Chemical in Midland, Michigan. He’d never been to Michigan before and had job options on the East and West coasts but chose the Midwest. 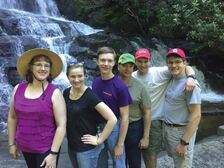 Lehman and his family today

“Honestly, I just liked the people I met in Michigan and at Dow better,” he said.

One of those people was Joe Overton, who was assigned by Dow to be his host during a day of interviewing. Overton picked him up from the airport, took him to dinner and made sure he got where he needed to go.

“At dinner, we just hit it off,” Lehman said. “I remember we had a discussion about the morality of seat belt laws, which was a hot public policy topic in Michigan at the time.”

Lehman says he was always “instinctively conservative,” but as an engineer, he hadn’t studied the academic roots of free markets and liberty. Overton, who later developed a model of political change recently popularized and named after him — the “Overton Window” — was one of the people that helped him realize the power of these ideas.

After Overton left Dow to join the Mackinac Center, Lehman followed suit, leaving behind his nine-year engineering career. He joined Overton and Larry Reed as they formed the Center into a powerful and trusted voice for limited government and free markets.

Lehman’s 25 years in the liberty movement have been at Mackinac and a short stint at the Cato Institute in Washington, serving the past 12 years as the Mackinac Center president. He believes the Center’s mission is the best way to use his interests and skills to help the most people.

“Public policy establishes rules by which we live our lives with one another,” he said. “If you get those rules right, the sky is the limit on human flourishing. But if you get them wrong, there is no limit on human misery.”

In his time at the Mackinac Center, Lehman is most proud of the team’s smooth transition when he took the reins in 2008 from Reed, who had been its president for 20 years. The Center has tripled in size since that transition and achieved significant policy victories, including the one he is most proud of: establishing Michigan as a right-to-work state.

In his personal life, Joe and his wife Karen are most proud of their children’s education.

“We home educated four kids all the way through K-12, and they’re all either employed or in college. We’re so glad we chose our own educational course for our kids.”