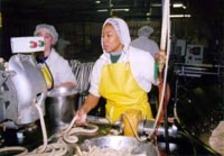 But there is another reason to be skeptical of these programs: They are fundamentally unfair. By taking taxes paid by all businesses and using them to subsidize only some businesses or industries at the expense of the others, government unbalances the economic playing field.

What the MEDC's press releases will not reveal is the impact of the deal with New York-based Boar's Head on Michigan businesses, such as Koegel Meats, Inc., in Flint.

The poor economics and unjust nature of these programs highlights an aspect of privatization known as shedding, whereby government eliminates certain of its functions entirely and leaves things to the more efficient resource allocation of competitive markets. One candidate for shedding is the Michigan Economic Development Corporation (MEDC),

A Case Study in Unfairness

A particularly egregious example of government "economic development" unfairness involves Boar's Head Provision Company, a meat products company headquartered in Brooklyn, New York. In exchange for Boar's Head's promise to invest $14 million and create 450 new jobs over the next three years, the Michigan Jobs Commission (predecessor to the MEDC) arranged in 1998 to give Boar's Head an "economic development package" worth up to $5.1 million in federal, state, and local resources. The package includes up to $3 million for equipment leasing, an abatement of the 6-mill state education tax of up to $212,590, and as much as $1,000 per worker for training. Armed with these "incentives," the company opened a processing plant near Holland, Michigan, on December 13, 1999.

In press releases, statements, and reports, the MEDC will count its deal with Boar's Head as adding 450 "new jobs" to Michigan's economy. What its press releases will not reveal is the impact of the deal on other Michigan businesses, such as Koegel Meats, Inc., in Flint.

Like Boar's Head, Koegel makes meat products. A Michigan-based family business for three generations, Koegel produces an extensive line of cold cuts and the popular "Koegel's Vienna Frankfurters" that are grilled by the millions in Michigan backyards every summer. Its products use recipes devised by Albert Koegel when he emigrated from Germany to Michigan and started the company in 1916. The firm sells 99 percent of its product in Michigan and employs 110 people at its Flint facility.

Al Koegel, son of the founder, is not one to make a big fuss about unfair competition. Like his dad before him and his son John who will carry on after him, Koegel would rather run the business than spend time lobbying politicians for special favors. He cannot help but point out when asked, however, that for all of its 85 years, Koegel Meats always paid its taxes and never took a dime of taxpayer money: no abatements, no subsidies. The company always trained its own employees with its own funds. Koegel once even turned down federal money for job training because he did not want the hassle of red tape and paperwork.

The Koegel story is the classic American free enterprise, Horatio Alger story. A German immigrant comes to America seeking opportunity, settles in Michigan, starts a company, works hard, and succeeds. His family keeps the business here through thick and thin in one of the most high-tax, economically distressed areas of the state. The business focuses on its customers and it grows—taking no public money and paying full freight in taxes year in and year out.

Now taxpayers, including the Koegel family, are being forced to help subsidize a New York firm that will compete directly with Koegel Meats.

The claims of MEDC to "create" jobs with its subsidies and tax packages for companies like Boar's Head are not borne out under scrutiny for several reasons. One reason is that any jobs Boar's Head does create come only at the expense of potential opportunities at other firms whose resources have been taxed away to make Boar's Head's jobs possible. Those resources are no longer available to those firms to build or expand facilities and train or hire new workers for themselves.

Another reason is that with Michigan's low unemployment rate, Boar's Head will find it difficult to find jobless workers to fill whatever jobs it does create. Boar's Head workers will most likely only be drawn from other Michigan businesses, most of which used their own funds to train and hire the workers in the first place. In this way MEDC job "creation" is really only job shifting.

A level playing field, where all businesses are treated fairly and equitably under the law, is the cornerstone of true economic development. Government cannot "create" jobs, but it can remove barriers to entrepreneurship so that everyone can compete equally in the marketplace of opportunity. Lansing policy makers should re-consider the MEDC's role in Michigan's economy and whether or not state government should be involved in "economic development" at all.