K-Zoo's "Legacy of Flight": Will Taxpayers Be Taken for Another Ride? 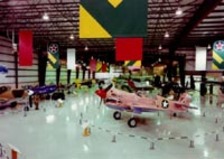 The new "Legacy of Flight" aviation and entertainment center is projected to cost $80 million, half of which Kalamazoo hopes the state will finance.

In 1984, a $70-million theme park opened in Flint, Michigan, amid much fanfare and hoopla. Situated on nearly seven acres of land in downtown Flint, the park was supposed to draw 900,000 visitors every year and help revive a dying inner city. It had the enthusiastic support of city and state officials and many big-name Flint citizens. Half of the $70 million it took to build the facility came from federal, state, and city governments.

Sixteen years later, nothing remains of the park. Closed after less than two years of sparse crowds, and then later demolished, the site is now part of the University of Michigan's Flint campus. "Build it and they will come" turned into, "Build it and they'll say ho-hum." The park's name—"AutoWorld"—has since become synonomous with overly ambitious boosterism and the folly of using public dollars for recreational projects that cannot pass a market test.

The Kalamazoo Air Zoo's Legacy of Flight project should not be funded with taxpayer dollars. If the idea were worthy of public support, it could fly under its own power instead of on a current of government subsidies.

With echoes of the Flint failure still reverberating, the city of Kalamazoo may be about to put taxpayers on the hook for another theme park. The Kalamazoo Air Zoo has announced plans to build a 6-1/2-acre "Legacy of Flight" attraction—an aviation entertainment and education center slated to open in June 2003. Local leaders are hoping to convince the state of Michigan to come up with as much as half of the estimated $80 million construction cost. Options that would force visitors to the city to pay some of the cost are being discussed, including a 25% hike in the local hotel accommodations tax.

As was the case with AutoWorld, advocates of this project argue that they will succeed where others have failed. The 840,000 people projected to annually visit Legacy of Flight will indeed show up, they say, because the exhibits will be more engaging and exciting.

Others, however, are more skeptical, suggesting that the very fact that subsidies are needed to make the project "work" is evidence of its lack of economic viability. "Politicians think they're smarter than the market and that they know best how to spend other people's money," said Dr. Gary Wolfram, an economist at Hillsdale College. "But they should put their own money where their mouths are and invest their own personal savings in projects like this, not the hard-earned tax dollars of everybody else.

"Hundreds of privately funded recreational and educational projects are thriving all over America—from Disneyland to the Saginaw Zoo—while similar projects that require tax money often become expensive white elephants. Government should not be in the entertainment business any more than it should be in the pizza business," he added.

The Kalamazoo Air Zoo's Legacy of Flight project should not be funded with taxpayer dollars. If the idea were worthy of public support, it could fly under its own power instead of on a current of government subsidies.