Privatization by the Book: Competition for Campus Bookstores 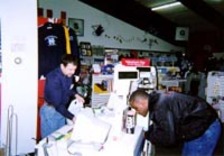 Every college student experiences the dreaded "campus bookstore" at least once in his career. Aisles and aisles of books and supplies at heart-stopping prices are as traditional a part of collegiate life as Saturday football games, mid-term exams, and fraternity parties.

But the form and content of the traditional bookstore has been changing. More and more, colleges are getting assistance from the private sector. In addition, cyberspace is beginning to give the bricks-and-mortar college bookstores a run for their money.

At Midland's Northwood University, Follett operates under a lease agreement whereby the firm collects about 7% of the store's net revenue on a monthly basis.

Colleges (and universities) have begun contracting out for the operation of student bookstores with great success. Indeed, in 1982 only 7% of America's 3,500 colleges and universities contracted with outside vendors today, that number exceeds 30%. Today, Internet-based bookstores are also competing with traditional operators to deliver the best products at the lowest costs.

The Follett Corporation is one company that is operating both traditional college bookstores as well as an Internet site. Follett is an education-centered business influencing more than 110,000 schools and university campuses nationwide. It was the brainchild of Charles Follett, a clerk in the store of one Charles Barnes.

In 1917, Charles Follett bought out a Barnes family member and the company split into two separate entities. The first, operated by Charles Barnes's son, became bookselling giant Barnes & Noble, the second became Follett Corporation. With 7,000-plus employees Follett is now a top operator of college and university bookstores and has been in the business since 1925.

At Midland's Northwood University, Follett operates under a lease agreement whereby the firm collects about 7% of the store's net revenue on a monthly basis. Since taking over the store, Follett has been able to increase the store's product lines. New products include "academically priced" computer software (which is discounted and available only to students and faculty), music compact discs, greeting cards, and general reading titles. Other popular changes brought about by Follett include allowing students to reserve their books online and sell back their books year-round (previously, the texts could only be returned during finals week).

Unfortunately, savings by universities and profits by companies such as Follett and Barnes & Noble do not appear to be affecting textbook prices, which are set by distributors. Mark-ups have largely remained the same at campus stores. But this may be changing.

It is estimated that new college textbooks represent a $5 billion annual market, catering to 15 million higher education students whose total discretionary spending power exceeds $100 billion yearly. With that much money at stake, you can bet Internet competition will try to give traditional school book and supply stores a run for their money, in much the same way e-mail and faxes are forcing the postal service to reinvent itself.

Since 1998, dozens of Internet sites have dedicated space to the sale (or resale) of college texts. The bigger players include Varsitybooks.com; Efollet.com; Studenttextbooks.com; Utbooks.com; Bigwords.com which actually will rent students texts, too; Classbook.com; Collegebookzone.com; and TextbookSource.com, as well as the Internet portal Yahoo, which maintains college texts on its shopping and auction sites. And these sites sell mostly new books. There is an equal number of sites where students can sell each other used texts, thus eliminating the campus book dealer as middleman.

Varsitybooks.com, the most visited site of its kind, has access to over 2.5 million titles through more than 25,000 publishers. While it stocks as many as 200,000 of the most popular texts, it can still conduct business with less overhead than a traditional campus store. Its Web site claims that many titles can be had for 40% off retail. Several other sites even allow students to compare their "cyber" prices with the exact price being charged at the local campus bookstore.

Experience shows that privatizing college and university bookstores can give students a wider range of product choices, while saving universities operational costs. And the Internet is putting student-consumers in the driver's seat when it comes to choices among product and service deliverers.

Competition may ensure that college students in the near future come to view the staid, quasi-monopoly campus bookstore as a historical curiosity, much like goldfish-swallowing and other dead university fads.