Let There Be Lighthouses! 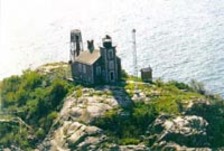 The Granite Island Lighthouse, located about 10 miles north of Marquette, was purchased by Freeland entrepreneur Scott Holman for $86,003.

Lighthouses are popular tourist attractions in Michigan and play a fascinating part in the state's history. But many of them are no longer needed and their upkeep and maintenance are costing taxpayers millions of dollars each year.

To solve this problem the federal government has recently asked an intriguing question: "Would you like to buy a lighthouse?" Last October, Scott Holman, an entrepreneur and avid scuba diver from Freeland, Michigan, emphatically answered, "Yes, I do." And he put his money where his mouth is. He placed a winning $86,003 bid for the 2,400-square-foot Granite Island Lighthouse, 10 miles off the coast of Marquette.

All of this is great news for American taxpayers: Instead of spending money to repair obsolete lighthouses, the federal government is collecting cash by selling them outrighta process also known as "shedding." Because Michigan has more lighthouses than any other state, policy makers would do well to absorb this lesson: See the light, lighten citizens' tax load, and sell the lighthouses.

The island upon which the lighthouse is built covers just under 2.5 acres of rock and grass and is also home to an oil house, boat slip, dock, and boat housing structure. The first Indians and Europeans to visit the island saw no need to risk climbing the sheer 60-foot walls. It was not until dynamite was applied to one end in the 1860s that access to the island became easy and constant.

Holman's bid was the highest submitted for the Granite Island Lighthouse, according to Melissa Green of the U. S. General Services Administration. What few know is that it was not his first bid. After Holman submitted his first offer of $56,003 he suffered nights of restless sleep, sure that he had offered too little. He upped his offer to $86,003, calming his nerves, and then waited patiently. The new bid made Holman the highest bidder by a margin of $6,000, beating out a serious bidder who flew to Boston to personally submit his own bid. Over 80 people bid on the Granite Island Lighthouse.

"There's a lot of work to be done," said Holman, who plans to restore the weatherbeaten lighthouse and seagull-populated island (which came with his purchase) and open both to future overnight stays. Holman also reports that many of the losing bidders have contacted him with offers of financial and refurbishing assistance, as well as requests to visit the island once repairs are complete. [Editor's Note: For photos and more information on the Granite Island lighthouse, visit www.graniteisland.com on the Internet].

Others in the state are lobbying legislators to change Michigan law to make ownership of lighthouses easier, and plans are in the works for a $35 million private, nonprofit Great Lakes Lighthouse Museum.

All of this is great news for American taxpayers: Instead of spending money to repair obsolete lighthouses, the federal government is collecting cash by selling them outright—a process also known as "shedding." The term shedding refers to the wholesale removal of an asset from a government's books.

Unfortunately, the state is still playing some role in Michigan lighthouse upkeep. Late last year the state budgeted more than $3 million for upkeep and restoration of lighthouses and Governor Engler has promised an additional $10.5 million. Still, progress has been made toward privatizing lighthouses, and others may be sold off soon.

The federal government began building lighthouses under President George Washington. To help ships navigate the nation's shores, the government built hundreds of lighthouses, supplied them with modern lenses, and often built caretakers' houses nearby. But radar, modern communications, and other innovations have now rendered many lighthouses obsolete.

Since 1939, the Coast Guard has been in charge of maintaining the nation's lighthouses, but keeping them in shape has often been a losing battle. "Many of them have been abandoned by the authorities and are falling victim to vandalism and the elements," reports Tim Harrison, editor of the monthly publication, Lighthouse Digest.

Selling these lighthouses is, therefore, a win-win situation for everyone. Investors like Holman have the incentive to improve the value of their property, the government collects revenue from the sale, and the lighthouses themselves, which are historical treasures, do not disintegrate through public neglect.

For those who are skeptical about turning these historic treasures over to private owners, we can turn to history as a guide. Before the 1960s, a few lighthouses were sold to private individuals. Most of these owners, including some in Michigan, have taken excellent care of their property. The Mendota Lighthouse, for example, is a well kept home on the Keweenaw Peninsula. Two others-the Sand Hills Lighthouse (also on the Keweenaw Peninsula) and the Big Bay Point Lighthouse north of Marquette—are now popular bed-and-breakfast establishments.

William Frabotta bought the Sand Hills Lighthouse almost 40 years ago. He refurbished the eight bedrooms, all with private baths, and now rents out the rooms in both summer and winter. Frabotta brags about the cross-country skiing in the winter and the view of the scenic Northern Lights from the tower during the summer. "People love to come here to see a part of history," he says.

America's dwindling supply of lighthouses presents us with both a case study in the shortcomings of public ownership and a heartening prospect of what private enterprise can do if given the chance. Because Michigan has more lighthouses than any other state, policy makers would do well to absorb this lesson: See the light, lighten citizens' tax load, and sell the lighthouses.

Burton Folsom is historian in residence with the Center for the American Idea in Houston, Texas, and a former senior fellow with the Mackinac Center for Public Policy in Midland, Michigan.