John Rapanos and the Necessary Ingredient for a Property Rights Win 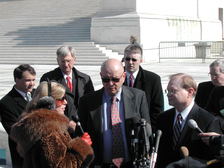 Judy Rapanos remembers the day in 2006 when her husband, John, learned that he had won his anguishing case at the U. S. Supreme Court. Reed Hopper, John’s attorney at the Pacific Legal Foundation, called with the good news. The court did not fully vindicate him, but recent reforms by the Trump administration further strengthen the protection of property rights that he fought for.

The case involved a couple hundred acres of Michigan farmland that John owned. We sent the Mackinac Center’s environmental policy director, Russ Harding, to visit the property. Russ had headed Gov. John Engler’s Department of Environmental Quality and he was able to interest The Detroit News in the story.

The government was persecuting John Rapanos — threatening millions of dollars in fines and years of incarceration — for allegedly violating federal wetlands law. The EPA claimed regulatory control of the property. The reason: It said the land’s 80-year-old, government-dug drainage ditches were “navigable waters” of the United States, stretching a term from the Clean Water Act beyond any reasonable interpretation.

U.S. District Court Judge Lawrence Zatkoff was dismayed. “[W]e have,” he said, “an American citizen who buys land, pays for it with his own money, and he moves some sand from one end to the other and the government wants me to give him 63 months in prison. Now if that isn’t our system gone crazy, I don’t know what is. And I am not going to do it.”

But the government attempted to overrule the judge. John’s case, and fate, went to the Supreme Court, supported by the Mackinac Center’s first brief there, written by Patrick Wright.

Even though John won the case, his victory was not complete. Bureaucrats ultimately and cruelly exacted their pound of flesh, trashing his reputation and devastating his finances and health. He passed in 2016, almost precisely a decade after my colleagues and I joined him at the court to support him.

The story doesn’t end there. Rules enacted in January by Trump administration regulators rolled back some Obama-era overreach by limiting and specifying the types of “navigable waterway” the federal government can regulate, leaving other waters, wetlands, ditches, puddles, and low spots to state jurisdiction. The president said the old rule “basically took your property from you.” The Mackinac Center’s Jason Hayes and our friends at State Policy Network advised federal policymakers who crafted the new measures.

These hard-won gains took decades. Favorable politics were necessary. Support from Pacific Legal Foundation, the Mackinac Center and many of our allies was consistent, forceful, and necessary. But the most necessary ingredient was John’s resolute refusal to back down, even when the government taunted him with some leniency in exchange for admitting some guilt. At his memorial service I said, “[A]n irresistible force in John met an immovable object in the government. The government budged.”