Montana Case Could Open Door for School Choice in Michigan 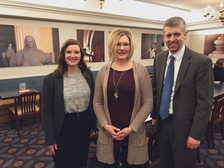 On Jan. 22, we were privileged to watch in person as justices of the U.S. Supreme Court heard oral arguments in Espinoza v. Montana Department of Revenue. Kendra Espinoza and her supporters hope that the court will strike down anti-aid amendments (known as Blaine amendments) that exist in most states as impediments to parental choice in education.

Michigan families could benefit from a broad ruling. Our state’s constitutional amendment is of much more recent vintage than most, but springs from the same soil of anti-Catholic bigotry. This year marks the golden anniversary of the amendment’s adoption, which overreached to deny families even indirect public support to choose any form of private religious schooling.

When voters approved the amendment in 1970, Catholic schools dominated Michigan’s private school sector. The campaign literature and public discourse of the time was rife with concern about the political power and prestige of the Catholic church. In fact, the very name chosen by the group backing the restrictive amendment, the Council Against Parochiaid, highlighted the driving animus.

Today, half the states have enacted either vouchers, tax credits or education savings accounts to aid eligible students seeking a private education. But not Michigan. Nowhere is the need for more educational options greater than in Detroit, an argument the Mackinac Center made in a friend-of-the-court brief for the Espinoza case. Five times this past decade, fourth- and eighth-graders in the Detroit district took the National Assessment of Educational Progress in math and reading. Five times they finished last in the nation among large cities. Charter schools, on average, give students a leg up academically, but the desired results for Detroit youths is still well out of reach.

Abolishing our 50-year-old amendment could pave the way for more schools like Detroit Cristo Rey. The Catholic high school exclusively serves low-income students, combining a rigorous college-track curriculum and a corporate work-study program to provide students with both academic and soft skills.

“Without Cristo Rey, I don't think I would have been able to succeed the way that I have,” said Dolores Perales, a southwest Detroit native and the school’s 2015 valedictorian. Her mom never reached college, and her dad never finished high school. Perales says her dedicated teachers and other staffers gave her confidence to apply to Michigan State University, where she last year earned a bachelor’s degree in environmental science. All three of her younger brothers have attended Cristo Rey, including Christian, a sophomore at Cornell University.

And now other families from across Michigan might find help, thanks to Espinoza, a single mother from Montana. In 2015 the Kalispell resident agreed to spearhead an Institute for Justice legal challenge when unelected officials in her state barred families from using tax-credit scholarship funds at religious schools. Their discriminatory action took the vast majority of options off the table, including the Christian school that gave Espinoza’s two daughters the safe and academically challenging learning environment they needed.

While waiting outside the Supreme Court the night before to reserve a space in line for the high-profile case, we had a chance to talk with a curious passerby who introduced herself as a retired career public educator. She had taught in low-income areas across the country, including Chicago’s South Side and Oakland, California. After we discussed her experiences with her and talked about the case together, she left to find someplace warm. She paused, turned back to us and said, “That lady should be able to spend that money at whatever school she wants to.”

Espinoza made the same point in a recent interview. "What takes away my right to be able to choose where my kids are educated?” she asked. “If I cannot homeschool them, why do I not have another option? Why would I have to choose the public schools?"