Securing the Blessings of Liberty 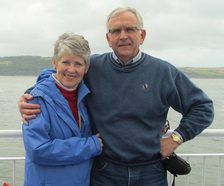 James and Deborah Lawson met as teenagers at Tecumseh High School, and their fairy tale love story continues as one of hard work, sacrifice, prayer, family decisions and success, but most importantly, love.

When I asked them about that most tremendous witness of being happily married for 50 years, they remarked that “family completes the aim of our lives.” They both came from very modest, middle-class Michigan families. When they were first married, they set out a goal of amassing a net worth of $10,000. Both worked very hard and have been very frugal; their children still argue over whether Mom or Dad is more frugal.

To be born in a country with liberties and freedom of expression, contract law, where you really can do anything you put your heart and soul into, are thoughts that resonate with them the most at this stage of their lives. They believe it truly is important to support, protect, and nurture those values and open up opportunities to flourish for those who have not yet taken or been given the opportunity to fully express themselves.

James started out in education as a high school teacher and coach. His father-in-law owned a fuel oil dealership and encouraged him to join the family business. But he really enjoyed teaching young minds and had no interest in or any experience with the fuel oil industry. Unfortunately, Deb’s mom became ill and her dad needed help, so James committed to help the family business for one year, taking a one-year leave of absence from teaching. In 1978, he started his brand-new career in fuel oil and one year later, found himself running the business. He would stay in the industry for 38 years.

Now that Deb and James have both retired and traveled to over 70 countries, they say, “Just waking up in the United States, you wake up with a silver spoon in your mouth.” Having freedom of religion and the ability to vote and talk freely with people of different opinions are, they say, incredible blessings. Most Americans, they regret, either forget or do not realize they have them.

When they are not traveling the world or back home in Michigan, they enjoy their new home of Naples, Florida. They were certainly attracted to the warm winters and lower cost of living. But they also love Florida for how it welcomes people who have worked very hard to be successful and want to keep as much of their hard-earned money as they can so they can give it to whomever they believe needs it most.

The Lawsons intend to include the Mackinac Center for Public Policy at the top of their estate plan. The reason, they said, is that it is in the forefront of protecting the principles this country was founded on — and those principles are worth preserving for generations to come. With all the success the Lawsons have achieved, James says he has been “very blessed to have married the woman of my dreams and that I live in these United States of America.”

We at the Mackinac Center for Public Policy are blessed to know the Lawsons and count them among our supporters who will preserve the legacy they care so deeply about.