Who is Really Dedicated to Stopping Climate Change? 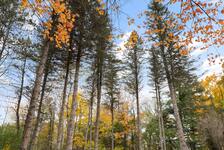 As free-market advocates, the Mackinac Center’s Environmental Policy Initiative thinks that the best way to spend money on environmental issues, like climate change, is for advocates to invest their own resources on solutions they choose. For as the economist Milton Friedman observed, you’ll be more careful in spending your own money than in spending someone else’s. That is, you’ll be far more likely seek out the most effective options at the best price when you have skin in the game.

But we have seen that businesses that seek to profit from government mandates, along with powerful special interests, love to team up with big government and do their part to “halt climate change.” They’re happy to do so because stopping climate change is “for the greater good,” plus the costs are cloaked in green moral superiority and borne by taxpayers and rate payers.

This growing penchant for spending other people’s money on environmental issues was the reason we developed the MyClimatePledge.com website. It was a response to the Global Climate Strike, a campaign backed by powerful and well-funded progressive green groups that demanded governments across the planet ban the use of fossil fuels and mandate a transition to “100% renewable energy.” We asked climate activists to hold off on their campaign for these expensive and restrictive new regulations that would force people to endure lives powered by a meager and unreliable supply of expensive wind and solar energy. Instead, we said, they should put their own money where their protest signs were.

We told them about research that showed more people would join them in their climate mitigation plans if they knew that the activists had invested their own dollars in the cause. In other words, a personal investment would be far more effective than just skipping a class and waving a sign for a day. We even provided a sign-up form that would help them publicly commit to planting enough trees to absorb their own greenhouse gas emissions. They could also refuse to ride in a personal automobile for a year and choose to ride a bike instead. We also suggested ways they could reduce their energy consumption, such as changing the settings on their home thermostat to live in a cooler house in the winter and a warmer house in the summer.

But strangely enough, the climate protesters refused to take part! We publicized the website in an op-ed on TheHill.com, and it had several thousand visitors during the weeklong global climate strike. But only 17 people committed to doing something concrete to cut their own emissions.

That limited response tends to prove the truth of Friedman’s observation. If you seriously believe that the fate of the world is at stake, you can demonstrate your commitment to saving it by spending a few of your own dollars. If, however, your solution requires that everyone but you opens their wallet, while you can’t be bothered to even plant a tree or turn your thermostat down a few degrees, reasonable people are right to question your commitment to solving this latest “existential crisis.”