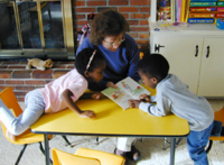 Kathy De Pree of Midland knows what many studies have shown: Parental involvement is crucial to children's educational success. Above, daughter Kelsey and son Kurtis learn their lessons from mom.

A growing number of Michigan parents are looking beyond traditional public schools to private and home school options for the education of their children.

Private schools in Metro Detroit-some with tuition costs as high as $16,000-per year have reported significant increases in inquiries from parents. Some soon-to-be parents have gone so far as to contact private high schools even before their children are born, The Detroit News reported.

"I would call it interest and curiosity," Jorge Prosperi, director of admissions at Detroit Country Day School in Beverly Hills, told the News. "They use the word shopping: 'We're shopping around.' I notice that they want to compare and contrast."

Over the last decade, nationwide enrollment in private schools has increased by nearly 17 percent, according to the National Association of Independent Schools.

As a result, many private schools have compiled waiting lists for admission. Greenhills School, a preparatory school serving grades 6-12 in Ann Arbor, has a waiting list for grades six and nine, for instance.

Many parents say their interest in private schools stems from the schools' reputations for high quality, but also cite concerns over public school safety and an increasing interest in the possibility of tuition vouchers. Parents also point to small classes and college preparatory curricula as reasons why they consider private schools.

Other parents have gone as far as to educate their children themselves at home, helping to fuel a growing nationwide movement. Although home schoolers are difficult to track, the National Home Education Research Institute estimates that as many as 1.7 million children receive their education at home and that this number grows by as much as 15 percent per year.

Home schooling advocates estimate that roughly 50,000 children in Michigan participate in home schooling. Brad Wurfel of the Michigan Department of Education told The Detroit News that 2,140 students reported their home-schooling status during the 1998-99 school year.

The Department of Education numbers reflect the fact that Michigan parents who home school are not required to register with the state; however, Rep. Gilda Jacobs (D-Huntington Woods) has introduced an anti-truancy bill (HB 5198) that could force home schooling families to register with their resident school districts.

Parents say they choose home schooling for a variety of reasons, including dissatisfaction with the traditional classroom environment, a desire to strengthen familial relationships, and religious convictions.

"I was frustrated with the schools that my kids were in," says Brenda Sawyer of Jackson, who home schooled her three children starting in 1983. Problems abounded in both the public and Christian schools in her area, she says.

"I wanted to give my kids something better than what I had," her husband, Mike, adds. "The Bible says that parents have a responsibility to teach their children."

Home schoolers also value the time that they must dedicate to their children. "It is very rewarding to be there when your child first reads," says Kathy De Pree of Midland, who home schooled her five children.

Another advantage of home schooling is its flexibility. De Pree indicated that thousands of home schooling curricula now exist, and this variety allows parents to tailor their lessons to their teaching styles and their children's needs.

To some parents, it may appear daunting to teach their children, but the importance of education demands sacrifice in the short term, notes Yolanda Haynes of Detroit, who has home schooled five children and will home school her remaining two. "Pay now or pay later," she says.

But education may not be the biggest challenge of home schooling.

"Academics is the easy part," says De Pree. "The hard part is training your child's character."

The efforts of home schooling, however, generally prove rewarding and beneficial in the long run, most advocates say.

"It's rewarding when your kids come back and say, 'I'm glad I was home schooled,'" Haynes says.