But Reforms Also Needed to Improve Public Education, Engler Says in State of the State Address 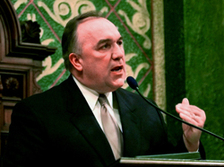 The theme of education took front and center as Governor John Engler reviewed a host of past accomplishments and outlined new proposals in his annual State of the State message before a joint session of the Michigan legislature on January 19.

To achieve this goal, Engler said, "we need full freedom, full choice, and full funding in Michigan public schools." Engler emphasized the last item as he proceeded to outline proposals totaling $800 million in additional spending on education over the next three years.

Included in those proposals was an increase of the minimum state foundation grant from the current $5,600 per student to $6,500 per student.

The governor also called for new programs to provide public school teachers with laptop computers and $1,000 bonuses to employees at elementary schools whose students do well on state assessment tests or make improvements in scores.

But new money for education should come with new expectations for school performance, Engler warned.

"I've often said that money alone is not the answer," he said. "The answer is funding and reform. We will not have one without the other.

Reform, he said, requires "rigorous accountability from elected school boards and superintendents, outstanding performance from principals and educators, and full freedom for children and their families."

The governor's other proposals included abolishing the cap on university-authorized charter schools, granting principals greater autonomy in running their schools, and requiring children to attend summer school before the fourth grade if they have not learned to read.

"If by fourth grade a child still has not mastered reading, I propose that this legislature require summer school in an effort to save the child," Engler said. "Failure is unacceptable. Every child must read."

Engler also asked for more power to address local education problems, such as the Inkster district's financial crisis, at the state level.

"Give the state of Michigan clear legal authority to help school districts that are in trouble," he said. "Don't fail our children in failing districts."

Democrats responded positively to Engler's remarks, but expressed frustration at the timing of his proposals.

"Many of these issues are those that we've advanced and he's ignored," Rep. A.T. Frank (D-Saginaw) told the Detroit Free Press.

Republican leaders were cautiously optimistic about enacting the governor's ideas.

"The toughest proposal to pass will be raising the charter school cap," Senate Majority Leader Dan DeGrow (R-Port Huron) told The Detroit News. "We've already had trouble with that."