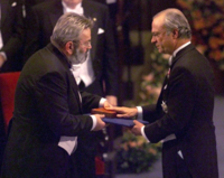 University of Michigan professor emeritus Martinus J.G. Veltman (left) is one of four professors from American universities who received a Nobel Prize in 1999-and who was not educated in American schools.

The awarding of most of 1999's Nobel Prizes to researchers at U. S. universities has prompted a number of observers to cite this event as proof of the quality of American higher education.

But some think the current crop of Nobel laureates only illustrates serious problems with the U. S. public school system in general.

"While Americans won the lion's share of Nobel Prizes again this year, not one of these winners was actually born in the United States," notes economist and Hoover Institute Senior Fellow Thomas Sowell. "This is not a vindication but an indictment of our educational system."

"Why were a quarter of a billion native-born Americans unable to win a single Nobel Prize this year, when a relative handful of naturalized Americans won so many?" asks Sowell.

The answer, he says, is that K-12 public education has failed to prepare American children for the intellectual rigors of higher education. American students, he argues, cannot compete with their foreign counterparts, who have received better preparation at the elementary and secondary levels, particularly in math and the sciences.

"Less than half the Ph.D.s in engineering and mathematics awarded by American universities are received by Americans," Sowell notes.

"The dominance of foreign-born students in hard-science programs in American universities is one of the less-discussed aspects of the dumbing-down of American education at all levels," he told MER. "American math-education is especially deficient, according to the major studies that have investigated it in recent years.

"Given the antecedence of math competency to any hard-science curriculum, it's not surprising that fewer and fewer American students choose these tracks," he adds.

Sowell also indicates that there is an inverse relationship between the difficulty of a subject and the proportion of American students that have chosen that field. The decline of American students in comprehensive subjects over the past 20 years coincides with a drop in test scores among American children, he says.

"Our current world leadership in science and technology, like our leadership in Nobel Prizes, owes much to people who never went through . . . American schools and colleges," he says. "Many come from countries which spend far less per pupil than we do but get far better results for their money."

But why are American universities so prestigious if American public education has these problems? According to Mark Perry, an assistant professor of economics at the University of Michigan-Flint, the answer concerns the competitive market in higher education.

"Competition breeds competence, and higher education is extremely competitive and therefore has achieved an extremely high level of competence and quality," he told MER. "Unlike public universities, elementary and secondary public schools have a virtual monopoly on education at the lower levels, so the low quality of education is predictable.

"Public education is suffering from the problems of inefficiency, declining quality, and rising costs that result when an organization is protected from competition," he says.