WWII Vet Still Sacrificing For a Higher Cause

The Mackinac Center is wholly supported by donations. Each issue, we feature one of our many supporters. This issue we hear from William Lindhout. 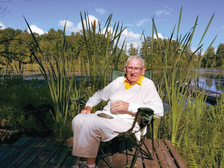 Could you please tell us a bit about your early years growing up?

Born and raised in Grand Rapids. The raised part was mostly during the Depression. Example: My sister who was 12 years older got a Buick convertible for her 14th birthday (legal age to drive at that time). I received a bike at 14 and was lucky to get it. I attended Ottawa Hills from kindergarten through high school, graduating in 1942. I was in the first class to be able to do that. First job was bagging candy in the basement of a drug store — ate too much of it. Favorite job was chief flunky at Indian Trails Golf Course.

How did you end up in architecture and starting your own business?

My father, born in Belgium, was a second-generation architect. He died at 53, when I was 15. This didn’t allow me the greatest insight into the profession at that age, but it certainly did plant seeds. My mother’s employment after his death was at Michigan State. My enrollment in the fall of 1942 took advantage of her employment there, as did my employment of sweeping the floor at the women’s gym at 5 a.m. each day. I was in the engineering school, as close as I could get to architecture. World War II interrupted that venture, and I entered into the Navy in April of 1943. After 60,000 miles on the USS Bennington and almost 500 hours in the back end of a torpedo bomber, I found myself entering into the architectural school of the University of Michigan on Nov. 1, 1945. GI Bill. That November date was the result of the accelerated WWII program and fit with my Oct. 15 discharge from (Naval Station) Great Lakes.

After graduation in 1950, I worked with a Detroit architectural firm for seven years. I was engaged in everything from locker rooms for the steel mill workers at the Ford Rouge Plant to rectories, convents and elementary schools. The biggest project was the transformation of the old Detroiter Hotel into a senior housing facility.

The one rewarding commission was a residence for an upper-level Ford exec, where I was given the freedom of design for a contemporary home. That type of architecture has more recently been identified as “midcentury modern.” This freedom did not seem on the firm’s horizon, so I opened up in a storefront on 5 Mile Road in Livonia in 1957. I had a docket of three very small residential projects in the offering. They were all Frank Lloyd Wright-influenced, but certainly not on Wright budgets. They were all schoolteachers!

At 94 years old, what drives you to continue working every day, and what can others learn from you for the sake of their own longevity?

I continue to work because I love being around the creativity of what we do. I feed off the youth that surrounds me and I hope they benefit to some degree from my presence. Truthfully, the only reason I can still practice is because I jumped aboard when computer-assisted design entered the profession. Many of my contemporaries simply retired instead.

While I don’t function at the level of the younger staff, I still can produce a detailed working drawing for construction or a simple 3D study when needed. My son Piet brought the firm to its present level of more than 10 architects, and he is now semi-retired. This past summer we had the rewarding experience of attending an open house for a new manufacturing facility. He had designed the intricate factory layout in the rear of the site; I had done the supporting office in the front. In his 32 years with the firm, we didn’t have a lot of opportunities like that.

In what ways have you seen the state and the country change in your years doing business?

The strongest influence on our work in recent years is the up-front requirements before we can even seriously start on a project. Basically, we are required to submit almost complete civil engineering drawings covering the site as well as reasonably detailed renderings of the building appearance. For some of our clients, this cost, without assurance of even being able to build, is hard to swallow. Also, the green era has been a strong influence on our building and zoning requirements and costs. I have always been green; I was taught that way, but today’s green can often be extreme.

I know that golf is one of your personal passions. Could you tell us a bit about your journey in the game and some of your favorite experiences?

You may be sorry that you asked this question. I will have tough time stopping at “bit.”

Acknowledging that I wasn’t headed for football or basketball, my father set me up with a whole summer of golf lessons when I was 13. That did it. Three years on Ottawa Hills golf team, and I was off and running. Last January I played my 464th golf course in Florida (shot my age for the 20th time).

Major involvement with the game would be having served on the Board of Governors of the Golf Association of Michigan for 21 years. During this time, I became active in the birth of the USGA Slope Rating System, doing over 200 course ratings in Michigan and receiving the association’s Distinguished Service Award. This board involvement took me to such fantastic courses on our fall trips as Winged Foot and Cherry Hills.

Now more name dropping. With the good fortune of having had a wife of 65 years who was an ardent golfer, I have been to Scotland five times, Ireland once. Now we have Carnoustie, Royal Troon, and many others, with the most rewarding — St. Andrews Old Course — on the list. First time on The Old Course was in a rain storm, high winds and really cold. Loved it! Started out with three straight pars before I found one of those pot bunkers and made double.

Many club memberships over the years, which includes 20 years at Pinehurst Country Club.

What do you see as the most pressing issues facing our state?

One major concern is our major utility companies heading for an unrealistic goal in the use of “clean” energy. Michigan and solar are not reasonable companions. Any history of our weather should confirm this. I am waiting for someone to come up with a study of the amount of energy it takes to produce the aluminum that a wind vane requires vs. the energy that it will ever produce.

Why do you choose to support the work of the Mackinac Center?

I guess I am looking at the Mackinac Center as our local Judicial Watch. Judicial Watch has been producing an unbiased approach to seeking the truth in the U.S. government and I see MC doing the same close to home.