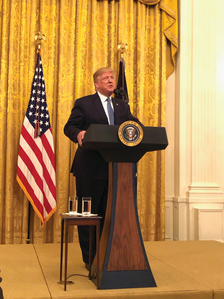 The president pointed to a “top priority” of his administration, which is “to ensure that America has among the very cleanest air and cleanest water on the planet.” He also described his commitment to promoting abundant opportunities for American workers and their families. The White House invitation was a welcome confirmation that the Mackinac Center, State Policy Network and other allied state-based free-market think tanks are equipping government officials with the tools and information they need to achieve that same objective.

In addition to the president, other speakers included Secretary of Energy Rick Perry, EPA Administrator Andrew Wheeler, Secretary of the Interior David Bernhardt, and Chairman of the Council on Environmental Quality Mary Newmayr. Each supported and expanded on the president’s three main contentions: that the U.S. leads the world in environmental quality, the U.S. has an unparalleled record of environmental stewardship, and the U.S. is improving the management of its public lands. Their words also fit well with the work being done by the Mackinac Center’s Environmental Policy Initiative.

For example, President Trump explained that properly focused environmental regulations protect our air and water while also encouraging further development of national energy reserves. He explained how levels of the six most common air pollutants — nitrogen dioxide, sulfur dioxide, carbon monoxide, lead, particulate matter and ozone — had decreased, on average, by 74% since 1970. But he also pointed out that over the same period, our economy has grown by 275%, and the U.S. has become a world leader in producing oil and natural gas. In our written work, our speaking engagements, and in meetings with state and federal regulators, the Environmental Policy Initiative has always promoted realistic regulation and the development of our domestic energy resources.

Our publications, like “Conflict to Cooperation: Collaborative Management of Federal Lands in Michigan,” look at the value of reducing the command-and-control mentality of some federal land managers. So does our work to create a private conservation working group, in which we focus on moving the management responsibilities of federal lands out into the states. We accomplish this goal by promoting programs like the Good Neighbor Authority, which empowers state foresters to carry out essential management activities, like spacing and thinning, to improve forest health and reduce insect and fire damage in federal forests. Through our work with SPN, we have also had the opportunity to meet with officials in the U.S. Department of Agriculture and its agency, the U.S. Forest Service, to discuss our publications and policy suggestions.

The president’s remarks fit well with these efforts, highlighting the federal government’s work that is promoting conservation and wise use, more recreational activities — including hunting and fishing — and better stewardship of the nation’s public lands. Previously, federal policy had stymied attempts to manage public lands and had effectively kept many areas out of bounds to all but the most fit and adventurous people. But opening up these areas helps improve forest health and reduce the risk of disease and fire. It also improves wildlife habitat and ensures better recreational access for all Americans.

The president ended his remarks by reminding listeners of his promise to fight for a bustling economy and a healthy environment. He quite rightly argued that it is possible to have both. It’s clear that the work of the Mackinac Center’s Environmental Policy Initiative, and of our sister state think tank partners, is having a positive effect on federal energy and environmental policy by encouraging better management of public lands. We want to reduce the pressure of excessive regulation and develop efficient, affordable, safe energy resources, and we’re excited to see these issues getting the attention they deserve.