What Do You Owe?

Cities across Michigan have $5.6 billion in pension debt 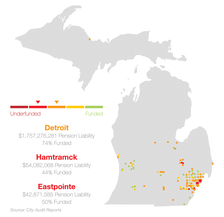 To see the map and check on how your city is doing, visit: mackinac.org/pensions

From Macomb to Marquette to Muskegon and many places in-between, Michigan cities are dealing with debt in their employee pension systems. The Mackinac Center recently compiled the unfunded liabilities of the 100 largest municipalities across the state, and the results weren’t great.

In total, there was $5.6 billion in debt. Dividing by the number of residents in those municipalities shows that elected officials have put them on the hook for more than $1,000 each. And that’s just the amount of unfunded liabilities at the local level; the state’s two largest pension programs owe tens of billions of dollars more.

Every year, financial analysts estimate how much state and local governments need to pay into their retirement systems to make them fully funded. Unfortunately, many public entities use unrealistic assumptions. They might overstate how well their investments will do, or underestimate how long retirees will live, for example. When politicians use bad assumptions or choose not to pay in the full amount they need to, debt results. And it often continues to accrue.

Tracking pension debt is not about blaming employees or trying to take away what they have been promised. It’s about finding solutions. Ignoring the problem could mean bankruptcy and harm to retirees, as happened in Detroit.

The harmful results of pension underfunding don’t have to wait until a city enters bankruptcy. Across the state, it means cuts to services and diverting money to retirement systems. It means fewer police officers and firefighters. Less spending on park maintenance. Fewer resources for roads. And higher taxes to make up the difference.

Illinois recently announced that 40 cents of every dollar it spends on education goes into the pension system. And some cities there have saved less than half of what they owe to retirees.

Luckily, some local governments in Michigan are doing things right; 15 cities have defined contribution retirement plans for their workers. With these 401(k)-type plans, employees deposit money and the city matches a certain amount. These plans cannot be underfunded, meaning workers own the funds when they retire, and taxpayers don’t have long-term debt. Local governments with defined contribution plans include Rochester Hills, Commerce Township, Oshtemo Township, Holland Township, Plainfield Township (in Kent County) and others.

Five municipalities with a pension system, meanwhile, have been making their full payments, meaning there is no debt in the system. The five are: Kalamazoo, Troy, Kentwood, Saginaw Township and Pontiac.

Pension debt often develops because bad incentives cause policymakers to defer the costs of government. But state and city workers, and the rest of us, end up paying for it. It’s important that workers, unions, taxpayers and elected officials all pay attention to solving or, better yet, preventing this problem.

To see the map and check on how your city is doing, visit: mackinac.org/pensions