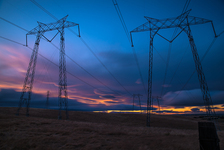 Michigan residents already pay the highest electricity rates of anyone in the Great Lakes region, and they do so for electric utility services that rank in the top five nationally for outages. That means we pay more than adjacent states but get less reliable electric service. Worse, the long-term plans for the state’s two big regulated monopoly utilities indicate that Michigan’s electricity rates will become even more expensive and less reliable.

The Environmental Policy Initiative at the Mackinac Center was happy to welcome David Stevenson, policy director at Delaware’s Caesar Rodney Institute, to our offices in March. Stevenson has a rich background in energy policy, having served on President Donald Trump’s Environmental Protection Agency transition team in 2017. He also regularly takes part in electricity planning and rate issues at Delaware’s Public Service Commission.

As he and I worked through these plans, we confirmed that Consumers and DTE plan to close many of their large baseload generation facilities to pursue a self-imposed 50-percent clean energy goal by 2030. We found a string of problems with their plans:

Collaborating with other state think tanks helps to ensure that we stay up-to-date on best practices and learn from policy experts who already work in areas of importance to our supporters.

Our work with allied think tanks like the Caesar Rodney Institute is another example of the valuable relationships we enjoy through State Policy Network. Collaboration is one of the things that helps to make sure that we are taking every opportunity to push Michigan’s electricity policy in the direction of free markets, improved reliability, fewer subsidies, and competitive rate reductions.