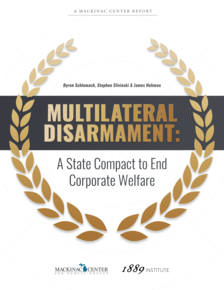 In an attempt to create jobs, the state government gives taxpayer money to businesses it deems qualified for handouts. These subsidies are unfair, ineffective and impede mutually beneficial trade. Nevertheless, they persist. Not just in Michigan, but in every other state. That’s because these special favors for select businesses serve a political function, if not an economic one.

Lawmakers want to control the discussion about their state’s economic performance, and distributing handouts gives them something to point at to bolster whatever story they want to tell. Want your state to be in on the ground floor of the tech revolution? Subsidize data centers. How about attracting young creative minds? Subsidize film production. Want to address the critical need for farm-to-table citrus? With enough subsidies, Michigan could even “compete” with Florida by growing subsidized oranges.

Even reluctant politicians justify the programs as necessary to compete with other states that offer subsidies. (Never mind that Michigan already spends the third most among all states on corporate handouts.)

These reluctant lawmakers feel like hostile countries in an arms race. They don’t enjoy spending money on special favors, but they feel like they have to keep up. That’s why we worked with friends in other think tanks to craft an interstate compact to eliminate corporate welfare.

States that sign onto the compact agree to stop subsidizing new companies once enough states have signed on.

The tricky part of setting up the compact was to define corporate welfare. Lawmakers often try to hide the fact that companies get taxpayer dollars. When I looked at the state’s reports, I counted 23 different terms for taking taxpayer money and using it to subsidize or support private businesses. In Michigan’s annual 164-page report about corporate subsidies, the only acknowledgment that the money used for its programs came from taxpayers appeared in a single footnote.

Competing over quality of life and business climate is healthy. Corporate welfare, however, marks a race to the bottom. It would be good to see Michigan become the first state to agree to stop such harmful competition.