On reaching a major milestone on a new road 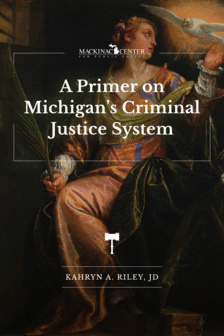 The Mackinac Center launched a new policy initiative in 2016 dealing with criminal justice policy. Center scholars had studied topics within this issue portfolio on an ad hoc basis for years, but this was its first foray into a concentrated effort, and it would not be without challenges.

Criminal justice policy can be politically fraught because so many people have preformed notions of what drives crime and how we should deal with it. These ideas are frequently outdated, anecdotal, politically driven or simply incorrect, but they’re strongly held because they form one’s perception of one’s personal safety. Commenting on criminal justice is further complicated by its history as a left-of-center issue. And finally, it’s not always easy to grasp a free-market think tank’s interest in what is very close to a social issue.

For these and other reasons, it was imperative for the Mackinac Center to develop expertise and establish a definitive point of view on its new policy area. This called for a study. We decided to create the resource we wished had existed at the time we launched the criminal justice initiative. It would be a comprehensive overview of the major state functions at work in this space and what their operations might look like in practice. The final, peer-reviewed resource describes how legislators create a criminal law, how various layers of law enforcement offices derive their authority and work together in Michigan, what happens during a criminal trial and sentencing, and how the state prison system operates.

Due to its breadth and depth and its many, many footnotes (for which I wish to gratefully acknowledge editor and Research Director Michael Van Beek), the primer took a long time to finish. By then, the Center had become an acknowledged source of expertise on the issue, providing an underrepresented free-market point of view. It had founded and now leads a much-needed statewide coalition of advocates, academics and justice system personnel. It has partnered with think tanks that wish to replicate our successes elsewhere, and it produces a steady drumbeat of publications calling for data-driven, public-safety-focused reforms. The study itself was well received.

We hope that this publication and its many references to other authoritative documents will give readers a solid foundation of information from which to weigh policy proposals. We created the publication we wished had existed when we started, and we’re confident that it will help educate both professionals and the general public about this important aspect of government and community life.