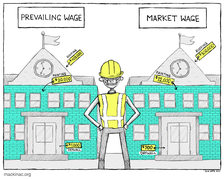 Michigan has officially repealed its 50-year-old law mandating higher costs on government construction projects. The “prevailing wage” law required union wages on public projects, regardless of whether the work could be done better or at a lower cost through fair bidding.

The law was confusing, requiring that state agencies try to set hundreds of thousands of wage classifications every year. Any homeowner in the state who has had a project done — a deck built, a driveway paved, a room painted — operates by looking at the cost and quality of the work when choosing a contractor. That wasn’t the case for schools, universities or cities, though. They had a government mandate of what to pay — an unfair and inefficient bidding process.

Proponents of the law say it resulted in better work and that eliminating it will mean lower wages and worse service. That’s a silly argument. School boards and cities aren’t forced to pay the lowest cost; they can take into account quality and cost, just like everyone else. If it makes sense to pay more for higher quality, public entities are free to do so. A local community knows more about how much things truly cost than a centralized government trying to enforce a decades-old law.

This law was only repealed because of the hard work of a variety of groups — led by the Associated Builders and Contractors — that gathered the signatures to present a citizens initiative to lawmakers. The House and the Senate quickly passed the repeal, bypassing a veto threatened by Gov. Rick Snyder. The repeal went into effect this summer.