Making an Impact Close to Home 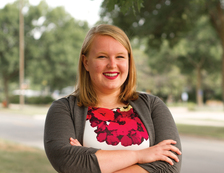 I still remember the moment when I told my parents I was going to be a political science major.

They thought I was joking. I hated politics and didn’t really watch the news, so it did not seem like a natural fit.

At the time, I shrugged off their comments. I knew that I needed a major and U.S. government happened to be one of my favorite classes in high school. As I wrapped up my first year of college, I grew more and more anxious about my choice for a major. The doubt only grew after a less-than-satisfying experience interning at a state political group that summer. I began to wonder if political science wasn’t for me, after all.

Shortly thereafter, I stumbled upon the Mackinac Center. Despite living in Michigan all my life, I knew very little about it. I decided to do some research into what the Center stood for and what its focus was. After reading article after article, I came to a realization.

It wasn’t all politics that I didn’t care for, just national politics.

My distaste for national politics was solidified in the lead up to and aftermath of the 2016 presidential election, which seemed too remote. It was as if nothing I could say or do would prompt even one person to at least listen to my perspective. Social issues became so sensitive that touching them, even with a ten-foot pole, seemed to do nothing but add more chaos to the maddening stream of social and traditional media coverage.

Instead of returning to the political ring the following summer, I began my first internship at the Center.

The internship lifted a giant weight off my chest. I felt as if what I said mattered and what I was working for was achievable. The policies that we were involved with didn’t affect some tiny group of people hundreds of miles away; rather, they touched my neighbors, my friends and my family.

It’s not that national issues aren’t important. After all, they are what makes America the country that it is. But in my experience, the general public is more attracted to the fashionable issues than the important ones. The Center turns this preference on its head by taking up lesser-known but very important issues and guiding them into the spotlight.

For me, this is much more rewarding. There’s nothing quite like talking about occupational licensing to your hairdresser after she’s asked what you’re up to this summer. It’s hard to be apathetic about state policy, especially since it directly affects everyone you know.

When the Center offered me an internship for the second consecutive summer, I couldn’t say yes fast enough.

National issues certainly take the cake when it comes to popularity. Anyone you ask could list several pressing national issues across a wide array of topics. Sometimes, though, it isn’t a matter of what issues are popular, but which ones will make a difference. I know I can make the biggest impact through state policy work, and I’m thankful that the Mackinac Center is helping me do just that.