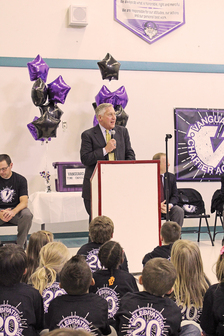 First, Michigan passed a charter school law in 1993. Second, the new law took on a deeper significance because his only son, David, was born in 1994.

“It changed from being a public policy issue for me to a very personal issue,” said Huizenga, a West Michigan business owner and member of the Mackinac Center Board of Directors. “As I held that infant in my arms, I resolved to do whatever I could to help him achieve a life well‑lived.”

But he also resolved to tackle a bigger challenge — helping other Michigan children who didn’t have the advantages that his own son would have.

By the next year, Huizenga had established National Heritage Academies and opened his first public charter school, Excel Charter Academy in Grand Rapids.

More than two decades later, NHA operates 87 schools in nine states, serving more than 58,000 students in grades K-8. Not only is it one of the largest charter school operators nationwide, but recent research shows that its students make greater academic gains than their peers at conventional public schools.

Because of his leadership and achievements in education, the Center for Education Reform will honor him at its silver anniversary celebration in Miami this October.

He is, the Center says, one of eight individuals it will recognize as “change agents, innovators, and leaders of breakthrough options for learners at all levels.”

That’s a long way to come for someone who had never run a school before launching NHA, Huizenga said in a recent interview at his lakefront home in Holland, Michigan.

But as someone who appreciates Milton Friedman, he put his trust in the power of competition to improve public education.

“Competition always does two things. It drives up quality and it drives down costs,” he said, recalling Friedman. “Anything government can do, the private sector can do better — and at half the cost.”

Huizenga also relied on his education and business experience. He holds a bachelor’s degree in economics from Hope College and an MBA from Michigan State University. He founded and is the chairman of Huizenga Group, which manages a portfolio of 13 businesses providing products and services for customers and manufacturers in the security, automotive and pharmaceutical industries, and consumer goods.

Opening his first school was a whirlwind of activity in the summer of 1995, Huizenga said.

He and a fellow education reformer, Mark DeHaan, put together a volunteer curriculum committee and submitted an application to Grand Valley State University by the May 15 deadline. On June 1, Huizenga learned that the university approved his proposal.

“It was an amazing summer. Two guys who had never opened a school before got that school open in three months, which no conventional school district would ever be able to accomplish.”

By Labor Day, 174 children had enrolled.

“It blew me away. We actually had to hire an additional teacher. When I saw that kind of response, I said, ‘I think we’ve got something here,’” Huizenga recalled.

Over the next 24 years of growth, NHA built school after school and implemented its standard “four pillars” model of academic excellence, parental participation, moral focus and student responsibility.

“Schools need to be deliberate in their responsibility to involve parents in every aspect of their child’s education,” said Huizenga, who visits one or two schools per month. “That’s one of my issues with the education system as it is. They think the educational elite need to make the decisions for all these people in the inner cities. Well, no. Let parents make their own decisions about education. That’s a Milton Friedman‑ism, too.”

Public schools also need to have a moral component in instruction, he said.

“If our nation is to continue to thrive, we must help students learn in a moral context. Our young children need to fully understand the moral framework that the early Greek philosophers found to be fundamental to a life well-lived. And we’ve lost that in district schools. They are afraid of anything that could be construed to be moral because they’ve confused morality with religion.”

“Our ‘Moral Focus’ curriculum, like other aspects of student learning, is guided by a specific paradigm: the four Greek cardinal virtues of temperance, prudence, justice and fortitude, which traces its origin back to the early Greek philosophers. Names like Socrates, Plato and Aristotle all celebrated these virtues.”

That acknowledgement, along with parental involvement, a moral component and — again — competition are the four things that Huizenga believes could most improve public education in general.

“Since competition drives excellence and efficiency, we must build as much competition into public education as possible,” he said.

“Essentially,” says Huizenga, “what we’re all about is commonsense education — and in education, common sense is not very common anymore.”

In that belief, he and the Mackinac Center are “comrades in arms,” Huizenga said.

A Mackinac Center supporter since 1994, Huizenga joined its board in 2012.

In addition to being a board member at the Mackinac Center, Huizenga serves on the board of the Acton Institute in Grand Rapids, Michigan, and the Salvation Army National Advisory Board. He also previously served as the chairman of the board of Stephen’s Children, a ministry for children living in the slums of Cairo, Egypt; he and the founder of that ministry each opened their first school in the same year.

As one of the largest for-profit charter management companies in the nation, NHA comes under regular scrutiny from researchers, politicians and media outlets.

A recent study by researchers at the University of Michigan showed that National Heritage schools produce significantly higher gains in math achievement, while a study by Stanford University’s Center for Research on Education Outcomes showed significant gains in both math and reading.

Another recent study, this one by the Mackinac Center, showed that, on average, Michigan charter schools receive about $2,782 less per pupil in total funding than conventional public schools.

If one multiplies that amount by the enrollment in NHA schools and in PrepNet, his charter high school company, taxpayers save over $100 million this year alone, Huizenga pointed out.

Huizenga has a ready answer for critics who depict for-profit charter school companies as entities that focus on profit above children, or line their own pockets with tax dollars.

Huizenga takes issue with the media that relentlessly adds the prefix “the for-profit” to National Heritage Academies, and the critics who give the impression that the profit motive is suspect. “If we can provide a superior education, save the taxpayers millions of dollars, pay a boatload of taxes, and still have some money left over at the end of the year, I think we have created more value than any district or not-for-profit,” he says.

In NHA’s case, the profits are invested back into the company, not distributed to anyone as income.

“I put bread on the table not from National Heritage,” Huizenga said. “The profit doesn’t go into somebody’s pocket; it goes into the next school we build. I make my livelihood off the 13 enterprises that Huizenga Group operates.”

What lies ahead for NHA and PrepNet?

“When we started out, I said that I either want to be the best or I want to join the best solution for public education. So far, we haven’t seen anybody we’d rather trade places with, but we’re always looking. When we find that, we’ll join forces,” Huizenga said.

“So for the future, we’ll keep on opening schools. Those kids need a future.”