New laws among most innovative in the nation 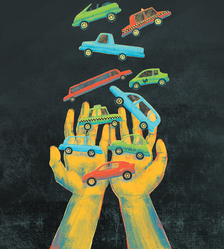 Although the 2016 lame-duck legislative session had more thorns than limited government proponents might have preferred, there was at least one rose: transportation regulations. Michigan is now among the best in the country when it comes to helping people get around.

For the past several years, six cities in Michigan have had access to ridesharing platforms like Uber and Lyft, which provide a quick, convenient alternative to taxis through a smartphone app. Research shows that the introduction of Uber drastically lowers drunken driving incidents and some other crimes. Ridesharing has provided safe, reliable transportation for countless Michiganders and a new source of income for many others.

But since they entered the state, ridesharing companies have operated in a legal gray area. Some cities welcomed them, but others were less receptive. Ann Arbor issued cease-and-desist orders to the companies. When drivers operated there anyway, dozens received tickets for operating vehicles without the proper licenses — despite the fact that there wasn’t a license set up for this kind of work.

The best solution to these problems was a statewide standard for ridesharing companies, drivers and vehicles that would let a driver follow the same laws whether she operated in Detroit or Grand Rapids. It would open up the industry to growth in new cities. But the Legislature also considered allowing cities and airports to create and enforce their own regulations — even banning these companies altogether. This approach would have spelled disaster, especially in and around Detroit, where each city, along with the airport, could have created its own draconian rules for drivers to follow. This concept could have eliminated the industry in Michigan.

At the beginning of 2016, we went out to learn more from ridesharing drivers themselves. They had compelling stories to tell. There was Kevin, who saved his family’s house from foreclosure using funds from Uber. Tim, who quit his job in restaurant management to launch his own company while supporting himself during the transition by driving. Larry, who found a new life and income for himself after he retired from General Motors Co.

But there were dark sides to some of these stories as well. All of those drivers knew someone who had been ticketed, or had received tickets themselves. It’s hard to make a living when the legality of that living isn’t completely clear, and many pursued it with trepidation.

Fortunately, the Michigan Legislature acted to preserve ridesharing with sensible statewide regulations. Now, no matter where they are, drivers are in the clear as long as they drive responsibly and follow the rules laid out by Uber and Lyft. This alone is remarkable, as cities around the country make headlines for going in the opposite direction. But this new legislation went a step further, reducing and standardizing the regulatory burden of taxis and limousine companies. This extra step puts Michigan at the forefront of transportation reform.

The new law, signed by Gov. Rick Snyder in December, is a win for Michigan as well as Michiganders. The state is officially among the most innovative in the nation when it comes to transportation regulations, and that innovation is sure to bring rewards in the future.