An Interview With a Supporter 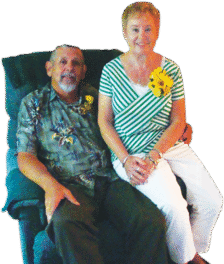 "It is not an easy thing to continue to fight when everyone seems against you."

Ida Salisbury was referring to the Mackinac Center when she said those words, but they apply just as well to her own life.

Born and raised in Michigan, Salisbury and her family have a history many of us would recognize. She has seen the state and country undergo many changes, and she was involved in many of them.

Ida and her husband have supported the Mackinac Center for many years, and she loves to read CapCon. But they are active in the public sphere in other ways as well — working on campaigns and attending rallies in Washington, D.C., for example.

“What’s going on is nuts,” she said. “If we don’t stay informed and know what’s going on, we’re all going to suffer for it.”

Salisbury has long kept vigilant for signs of government malfeasance. When her son had a teacher who worked part time for the school and part time for the union, she complained. “She didn’t teach, but she was getting paid by the district and by the union,” Salisbury said, describing arrangements that are all too common in Michigan schools. “We didn’t pay our taxes for you to be gone!”

Looking back, Salisbury wishes she could have given her children an alternative education, privately or at home. She had run-ins with public school teachers who inserted their political opinions into the classroom and worries that state schools strive to lower every student to the same level, rather than raise them all up.

But Salisbury is not just passionate about education issues. Right-to-work hits close to home as well. “It’s something I think we should have had years ago!” she said. “I think it’s a catalyst to get more jobs to Michigan, and lower the costs on the jobs that we do have.” And she has firsthand experience with union membership. During her time working at Central Michigan University, Salisbury had to join the United Auto Workers. “I worked in the office!” she said. “I thought that was strange.”

Ida was not forced into union membership her whole career, but her husband, Randall, was. After 31 years at General Motors Co., he was, she said, just as excited about right-to-work as she is. Both ran up against union officials over where their dues ended up. Ida had no interest in supporting groups that didn’t share her political views. Randall had similar reasons to object to the charity his union chose for him. “It didn’t make him very popular,” Ida said, but the Salisburys prefer principles over popularity.

Salisbury is still very happy to call Michigan home. “Michigan is a great place to live, it’s a great place for kids to grow up, and it’s a great place to work,” she said. “It used to be everyone worked at GM plants, and now there are so many other businesses. We only have one nephew who works for GM now; everybody else works somewhere else. … It’s just a land of opportunity where you can go and do what you want to do.”

The job opportunities in Michigan have enabled the Salisburys to keep their family close, and the recreational opportunities enable them to spend time together. They love to take their grandchildren on camping trips and will be joined this spring by their first great-grandchild. “It’s a joy for us,” Salisbury said. “We enjoy going up north; we love to motorcycle through Michigan; we love the water. I just can’t imagine being any place else.”