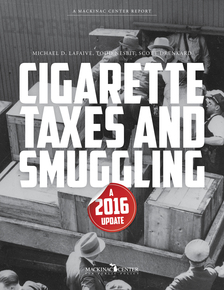 Read this study online at mackinac.org/s2016-09

The Mackinac Center for Public Policy closed 2016 with a major update of its nationally recognized work on cigarette smuggling. The study ranks 47 states by the degree to which cigarettes are smuggled in or out of each and confirms that Michigan’s smuggling rate has declined in recent years. It also contains an expanded review of ongoing research on the topic.

In 2008, the Mackinac Center released the report “Cigarette Taxes and Smuggling: A Statistical Analysis and Historical Review.” That document was inspired by arrests involving a cigarette smuggling cell operating in North Carolina and Michigan. At the time, its authors estimated that one-third of all the cigarettes consumed in the Great Lake State were contraband.

The authors developed a statistical model that compared legal paid sales to published smoking rates in nearly every state in the union. The difference between the two, they contended, was explained by smuggling and the desire to profit from different tax rates in different states.

Some states, like Minnesota, tolerate a modicum of cross-border cigarette shopping, but Michigan does not. Because it is impossible for scholars to tease out the difference between legal and illegal cross-border activity, they lump the two together as “smuggling” or “diversion.”

Before developing the updated estimate, based on data through 2014, authors Michael LaFaive, Todd Nesbit and Scott Drenkard reviewed other studies on the topic, which came from academic journals, government officials and consultancies. They found a range of estimates, but most of those show that smuggling is a significant problem, especially in states with high excise taxes.

The literature — published between 2005 and 2016 — fell into three major categories. Some involved survey work. A second category observed people’s behavior and a third was based on  statistical estimates made from data on consumption versus legal sales. Some of the 24 studies reviewed looked at the U.S. as a whole while others zeroed in on a particular state or city.

The most recent state-specific study found in the Center’s literature review was from the consultancy IHS Global, which estimated that 62 percent of New York state smokes were contraband. A 2015 study by the National Research Council’s Institute of Medicine pegged America’s smuggling rate at 8.5 percent while the authors pointed to other research that suggested it could be as high as 21 percent.

The Mackinac Center calculates — based on 2014 data — that 24 percent of all cigarettes consumed in Michigan were smuggled into the state. That gives Michigan 12th place in a ranking of states by their illicit tobacco consumption. That’s a drop from the highest ranking, which was 10th place.

The popularity of the Mackinac Center’s work with other scholars, law enforcement officials and industry leaders is one reason the Center works to update and publicize these smuggling figures each year. By educating the public, press and lawmakers and others around the country, the Center hopes that smarter cigarette excise tax policies are used around the nation.

LaFaive is the director of fiscal policy at the Mackinac Center. Nesbit is a member of the Mackinac Center Board of Scholars and a professor at The Ohio State University in Columbus, Ohio. Drenkard is an economist at the Washington, D.C.-based Tax Foundation.