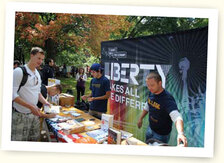 Every year, college students enroll in a school with the hopes that they will find a major, some new ideas and new friends.  Often, they leave with really only two of these. Too often, in fact, these students are given only one perspective in the role of government in public affairs: More is better. Students for a Free Economy uses a variety of activities to bring free-market ideas to students, both on-campus and off-campus.

Students for a Free Economy works actively to rebalance the terms of these issues. Christopher Deming, the Mackinac Center’s director of campus leadership, hit the ground running at the beginning of the 2010-2011 academic year, sending SFE materials to several college resource fairs and hosting a booth at an impressive 19 more, engaging students with pamphlets, T-shirts and most importantly, the ideas of liberty. Building on that foundation of outreach, SFE coordinated or brought students to a variety of events throughout the school year.

Among these was a “Weekend Exploring Liberty” conference held in April at Northwood University in Midland, Mich. Over 60 students registered for this three-day event. They came from all across the state and beyond. Representatives from Northwood University, the Acton Institute and the Cato Institute came and gave students a variety of perspectives on liberty.

SFE also helped bring debates to campuses. These debates were created by students for students and involved groups like the College Democrats, College Republicans, Young Democratic Socialists and College Libertarians, on a number of policy issues, including fiscal problems and education policies. For the first debate alone, more than 60 students attended the two-hour  event. Matt Needham president of the Michigan State University College Libertarians said:

“SFE has been extremely helpful for MSCL this year. … SFE helped guide us through the process of planning and executing successful events. MSCL successfully organized two debates, a war protest, as well as speaking events with Congressman Justin Amash, former New Mexico Gov. Gary Johnson and FEE President Larry Reed. SFE helped us by getting us in contact with speakers and helping us navigate through university bureaucracy.”

In February, SFE took more than 30 students from across the state to the International Students for Liberty Conference in Washington, D.C. Packing two 15-passenger vans with people and luggage, SFE students were able to make the long haul to meet other students and activists from around the world. Many of these young people will go on to use these networking opportunities to find jobs, land internships and make their way toward advocating for liberty after they graduate.

Minority opinions, especially those presented by advocates of free-market principles, must be constantly brought to the attention of all students in as many venues as possible. The competition of ideas is important in the development of a critical mind, and Students for a Free Economy will be there to make sure college students are introduced to free-market ideas.

Watch a video of students speaking about their experiences with SFE at www.mackinac.org/15101.