Politicians of all stripes like to talk about reforming government. Once in office, however, those sentiments quickly dissipate as lobbyists, vested interests, party leaders, campaign consultants and others make their voices heard. So the fact that several good-government policies — including dozens put forth by the Mackinac Center — have been introduced as legislation or become law is a promising development for Michigan residents.

In less than six months, the new Legislature and Gov. Rick Snyder have made the following changes in law, all of which had been recommended by the Center:

It’s a good beginning, but more needs to be done to transform the state and its economy. Fortunately, Center ideas remain in demand in Lansing. Five Center analysts testified before  legislative committees in the first quarter of 2011, and several others have shared their expertise since.

On April 12 and May 17, Patrick Wright, director of the Mackinac Center Legal Foundation, testified before the House Families, Children and Seniors Committee on the forced unionization of home care workers. In May he was joined by Sherry Loar, the MCLF’s lead client in a lawsuit to end this unconstitutional practice. The committee was considering legislation introduced by Rep. Paul Opsommer, R-Dewitt, that would prevent anyone from being designated a public employee without the consent of the Legislature. The bill has since passed the House, and the budget deal zeroes out funding for the state’s shell “employer” of day care providers, the Michigan Home Based Child Care Council.

Fiscal Policy Analyst James Hohman spoke on the need to reform the Michigan public school teachers’ retirement system. He told the Senate Education Committee on April 13 that the current system was “risky, expensive and likely unsustainable.”

April 20 found Paul Kersey, director of labor policy, speaking to the Michigan House Education Committee on legislation involving penalties for illegal teacher strikes. Current penalties make the teacher strike ban difficult to enforce. Earlier in the year, Kersey suggested that teachers unions that conduct illegal strikes should lose their collective bargaining power for at least three years. By April, amidst rumors of strikes, the House took up two bills to put teeth into the ban. Testifying on these bills, Kersey said: “Collective bargaining (for government employees) is a privilege, not a right. An illegal strike is the ultimate abuse of that privilege.”

Following Kersey’s testimony, one of the bills was modified to include automatic decertification of a union after an illegal strike.

Also, on the heels of Fiscal Policy Director Michael LaFaive’s testimony in February on the Michigan business tax, the Legislature has passed and the governor has signed a repeal of the MBT, replacing it with a much simpler flat 6 percent corporate income tax.

The new law, Hohman says, will make Michigan a better place to do business.

Similarly, the Michigan Economic Development Corp. announced it will become more transparent, a move long advocated by LaFaive. In 2009, he challenged the MEDC to post the names of companies receiving tax incentives and the value of other state and local incentives they are awarded. The MEDC is now doing so.

The state will also stop touting “indirect” jobs numbers in MEDC reports, another transparency-enhancing idea. Instead, the MEDC will only count actual new jobs created by the specific business receiving the credit.

The Legislature’s budget includes a requirement for competitive bidding for prison services, as LaFaive and other Mackinac Center analysts have suggested.

Another Mackinac Center initiative, Benefits in Balance, gained traction as the governor and Legislature wrestled with the state budget. As part of Gov. Snyder’s plans to cut state revenue sharing to local governments, local governments must make certain reforms to receive some of the revenue. Many of these requirements, related to employee benefits and other spending reforms, are suggested at BenefitsinBalance.com.

In another effort to bring benefits into balance, the state Senate passed legislation to require public employees to pay at least 20 percent of their health care premiums. As Center Education Policy Director Michael Van Beek has found, most school districts’ teacher contracts do not require any employee contribution to health care costs, and the districts that do generally require a very small percentage — meanwhile, the average private-sector employee contribution to health care costs is about 20 percent.

This disparity has been pointed out in Michigan Capitol Confidential (see article on back page), as well as in a piece by Detroit Free Press editorial page editor Stephen Henderson calling for employee benefit reform. The 80-20 legislation is currently in the House Oversight, Reform, and Ethics committee.

This is an exciting time for Michigan, with many opportunities for needed reform. The Mackinac Center will continue to work toward freedom in Michigan’s schools, homes and workplaces. 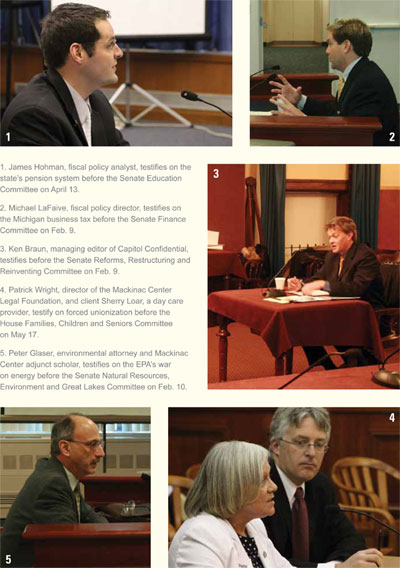 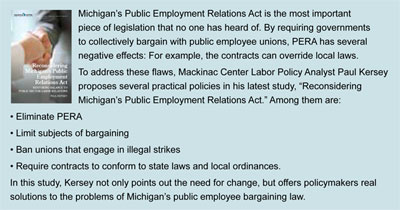