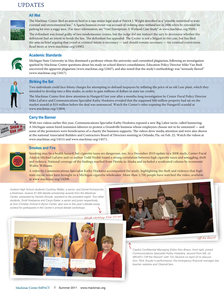 The Mackinac Center filed an amicus brief in a case senior legal analyst Patrick J. Wright described as a “possible watershed in state criminal and environmental law.” A Sparta business owner was accused of violating state wetland law in 2006 when he extended his parking lot over a soggy area. (For more information, see “Hart Enterprises: A Wetland Case Study.”)

The defendant was found guilty of two misdemeanor crimes, but the judge did not instruct the jury to determine whether the defendant had an intent to break the law. The defendant has appealed. The Center is not a litigant in the case, but has filed the amicus brief arguing that proof of criminal intent is necessary — and should remain necessary — for criminal convictions. Read more at www.mackinac.org/14982.

Two individuals could face felony charges for attempting to defraud taxpayers by inflating the price of an old Lear plant, which they intended to develop into a film studio, in order to gain millions of dollars in state tax credits.

The Mackinac Center first drew attention to Hangar42 last year after a months-long investigation by Center Fiscal Policy Director Mike LaFaive and Communications Specialist Kathy Hoekstra revealed that the supposed $40 million property had sat on the market unsold at $10 million before the deal was announced. Watch the Center’s video exposing the Hangar42 scandal.

With two videos earlier this year, Communications Specialist Kathy Hoekstra exposed a new Big Labor tactic called bannering: A Michigan union hired nonunion laborers to protest a Grandville business whose employees choose not to be unionized — and some of the protestors were beneficiaries of a charity the business supports. The videos drew media attention and were also shown at the national Associated Builders and Contractors Board of Directors meeting in Orlando, Fla. on Feb. 22. Watch the videos at www.mackinac.org/14515 and www.mackinac.org/14571.

Smoking may be a health hazard, but cigarette taxes are dangerous, too. In a December 2010 update to a 2008 study, Center Fiscal Analyst Michael LaFaive and co-author Todd Nesbit found a strong correlation between high cigarette taxes and smuggling, theft and violence. National coverage of the findings reached from Florida to Alaska and included a syndicated column by economist Walter Williams.

A video by Communications Specialist Kathy Hoekstra accompanied the study, highlighting the theft and violence that high state excise taxes have brought to a Michigan cigarette wholesaler. More than 2,700 people have watched the video, available at www.mackinac.org/14208.