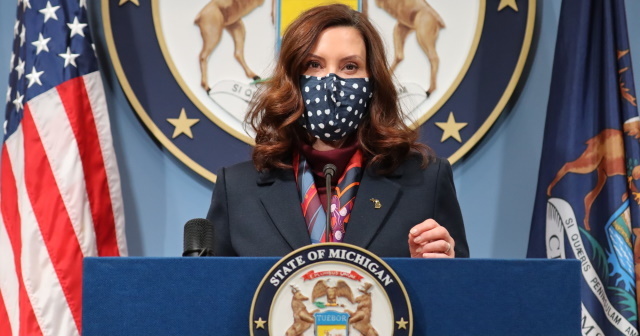 The governor has not done well leading by example

Editor's Note: This piece first appeared in The Detroit News on April 24, 2021.

Just last month, the Whitmer administration was praising the public for its role in driving down the number of COVID-19 cases. At a March 10 press conference, Dr. Joneigh Khaldun, the state’s chief medical executive, said Michigan residents "have by and large followed public health recommendations: wearing masks, washing hands and avoiding gatherings.”

But after weeks of rising case counts, the tables have turned, and Gov. Gretchen Whitmer is now blaming the public’s failure to comply with her pandemic rules for the state’s third wave. But who should be held responsible for this compliance problem?

The public official who could make the biggest difference in how well people comply is the governor herself. In fact, it’s part of her official duty. The Michigan Constitution says the governor is responsible for ensuring that laws are “faithfully executed.” If there’s a role for government to encourage compliance, Whitmer should lead the charge.

Of course, no one should expect 100% compliance with every law all the time. Even lower levels of compliance should be expected for mandates, like the governor’s, that are unprecedented and require prolonged deviations from common, everyday activity. But the governor hasn’t done herself any favors and has likely made the problem worse.

At the onset of the pandemic, the governor’s message to the public was unifying, promising that we would get through this pandemic together. But much of that initial goodwill evaporated as the debate about the state’s response became politicized. The governor fueled the partisan divide by locking out the Legislature from these decisions by using an antiquated law to unilaterally control the state’s response.

The governor dug the divide even deeper after the Michigan Supreme Court ruled that her actions were illegal. She blasted the court for its decision, implying that the state’s premier justices were little more than partisan pawns. Instead of collaborating with the Legislature after the ruling, Gov. Whitmer chose to maintain unilateral control by issuing orders through her officials at the state health department.

Her mandates confused people, which likely discouraged them from complying. Especially early in the pandemic, the governor issued orders that left people scratching their heads, such as prohibiting motorboats but not canoes, allowing outdoor exercise but not golf and declaring auto repair “essential” while forcing bike shops to close. She frequently reversed course on mandates and had to issue several executive orders just to fix mistakes or oversights in previous ones.

It was hard for people to keep up with the rapid policy changes let alone prepare for what might come next. Under those conditions, should it be any surprise that people hesitated to follow the orders in lockstep?

The governor’s decision to keep her data and science secret also probably works to reduce compliance. The public would more readily comply with mandates if they knew why they were necessary. But Whitmer has yet to reveal precisely what data she relies on to make decisions.

She has also failed to provide reliable benchmarks for the public to gauge whether restrictions were likely to end or be tightened. The benchmarks that she has offered, she ignores. For example, she once said that masks would be required until a vaccine is widely available. Multiple vaccines are currently widely available, and yet, the mask mandate persists.

Whitmer has not done well leading by example, either. When her husband allegedly sought special treatment for her family’s boat last summer, she said it was all a joke. Her participation in mass demonstrations and large gatherings suggests that even she thought it was OK to make exceptions to some of the rules. And more recently, despite state guidance to contrary, her staff’s vacations out of state also suggest that one need not follow state orders precisely.

Blaming the public when the numbers start going in the wrong direction is also unlikely to improve compliance. It’s hard to believe that accusing millions of people of not following rules they might disagree with would cause them to change their behavior.

Instead of blaming the public, Whitmer should stick to trying to encourage and inspire them, even if that means giving up an easy explanation for why her policies may not appear to be working.