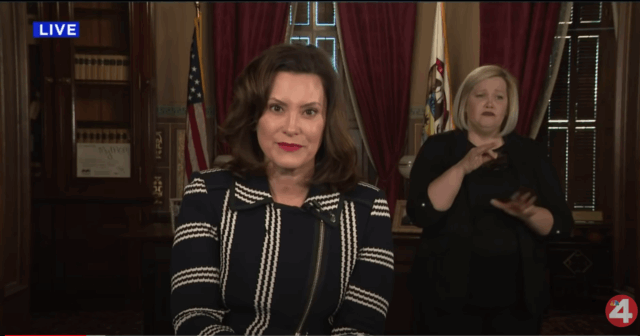 Explanations from the governor are confusing and lack detail

Gov. Gretchen Whitmer is making unprecedented use of executive power to respond to the COVID-19 pandemic. She says this is necessary to protect public health, but the case she makes in public to justify these actions is confusing and lacks detail. Although claiming to use “the best science,” Gov. Whitmer has provided virtually no details over the last eight weeks as to what that means.

This lack of information is surprising, because Gov. Whitmer promised to share data with the public. At a virtual town hall on April 2, she said, “We’re working really hard to make sure that we are transparent, so that people have got accurate information with which to make decisions.” While the state makes some data available to the public related to the coronavirus, Gov. Whitmer has yet to explain how this data is informing her decisions.

At that virtual town hall, she told viewers her team was making decisions based “on the best science, the best facts.” In an op-ed in The New York Times on April 21, she wrote that “we must understand the science and rely on the data when we make decisions” and that her decisions were “informed by the best science and epidemiology counsel there is.” A few days later in The Detroit News, she wrote, “I’m taking this action based on facts, data and recommendations from health care experts.”

As it is, however, the public is left having to take the governor’s word for it. Without meaningful details about the science and data being used, there is no way to know if these decisions are well-informed and well-reasoned or not.

The governor’s executive orders do not provide this detail. For instance, in her first stay-at-home order on March 23, she wrote that future decisions would be based on: “(1) data on COVID-19 infections and the disease’s rate of spread; (2) where sufficient medical personnel, hospital beds, and ventilators exist to meet the anticipated medical need; (3) the availability of personal protective equipment for the health-care workforce; (4) the state’s capacity to test for COVID-19 cases and isolate infected people; and (5) economic conditions in the state.” Since then, however, the governor has not provided an explanation on how these factors will be weighed or used.

Gov. Whitmer’s April 8 order to extend the stay-at-home rules mostly ignores this decision-making framework. It cites only two numbers about the coronavirus: a snapshot of total confirmed cases and deaths to date. There is no mention of whether there is sufficient medical personnel and hospital space and no mention of the state’s testing capacity. Instead, the order simply argues that because “this virus is both aggressive and persistent … we must be just as aggressive and persistent.” It cites no other data or rationale. Despite this, the extended stay-at-home order also says future decisions will be based on the same criteria laid out in the previous order — criteria it was mostly silent about.

The stay-at-home order was again extended on April 24, and the rationale provided also largely ignored the decision-making factors listed in previous orders. Without citing any data, the order says the state’s testing capacity has increased, but then adds a different rationale for extending the stay-at-home order. It was required “to suppress the spread of COVID-19,” “prevent the state’s health care system from being overwhelmed,” “allow time for the production of critical test kits, ventilators, and personal protective equipment,” “establish the public health infrastructure necessary to contain the spread of infection” and “to avoid needless deaths.”

Six days later, after the Legislature refused to extend the state of emergency beyond April 30, Gov. Whitmer issued new orders to extend the emergency. Her press release that announced this extension said these executive orders “cite extensive data validating the existence of an emergency and disaster across the State of Michigan.” But like their predecessors, these orders reference no new data nor provide information about the factors previous executive orders said would determine future decisions. The only statistics mentioned were daily snapshots of the number of confirmed cases and deaths to date.

In fact, the orders argue for the emergency based largely on characteristics of the virus, calling it “aggressive and persistent” and saying “there remains no treatment.” Further, they say the virus “remains exceptionally easy to transmit,” and it can “[pass] from asymptomatic individuals and surviv[e] on surfaces for days.” It claims the state “still lack[s] adequate means to fully test for it and trace its spread” and cites the total cases and deaths to date.

The original emergency declaration argued it was needed because other government entities had declared emergencies and Michigan presumed it had found its first two COVID-19 cases. The new declaration provided more information, but not specific detail. It says a state emergency is needed “to build and maintain infrastructure to stop the spread of COVID-19, trace infections, and quickly direct additional resources to hotspots as they arise.” It adds economic concerns to the rationale as well: “emergency recovery efforts remain necessary … to support Michiganders in need due to the economic effects of this pandemic,” and “emergency conditions will exist” until “the economic and fiscal harms from this pandemic have been contained.” But again, no further detail or explanation was provided.

The plans to gradually reopen Michigan’s economy are also “data driven,” according to an interview the governor gave CNN on April 23. At a virtual town hall on April 30, Gov. Whitmer said decisions about how to “start to re-engage” have to be done “in a data-driven way, with the best health information and statistics.”

But the first two executive orders that relaxed some of the former restrictions on economic activity do not explain the science or data used to make the decisions. They claim the stay-at-home and other orders “have been effective” because “the number of new confirmed cases each day has started to drop.” Then they declare: “We can now start the process of gradually resuming in-person work and activities that were temporarily suspended.” Again, no other explanation is provided.

Based on her communications with the public, it appears Gov. Whitmer is using the number of confirmed cases and related deaths to assess the public health risk of the coronavirus. But it is impossible to say with much certainty, because the governor has not provided the public with details about what data and science she is using. In the immediate aftermath of the emergency, it might be unreasonable to ask this of the governor, but after eight weeks, the public has a right to demand more detailed information.