One of the obvious indicators of investment need levels is based on growth in traffic levels vs. growth in the number of lane miles available to carry that traffic. Interestingly, in Michigan, between 1980 and 2000, vehicle miles traveled (VMT) grew 58 percent, yet the number of available lane miles grew just 3 percent.[63] Table 6 summarizes more recent data for both Michigan trunkline VMT and commercial vehicle miles traveled (CVMT).[64] Data for non-trunkline travel is not available. Between 1995 and 2004, VMT grew 18 percent, but miles grew just 1.4 percent. Going forward, MDOT estimates VMT will grow, from 2004 values, 14.6 percent by 2015, and by 37.9 percent by 2030. If no new miles are added we would have had a 62.8 percent increase in VMT between 1995 and 2030 with just a 1.4 percent increase in mileage. 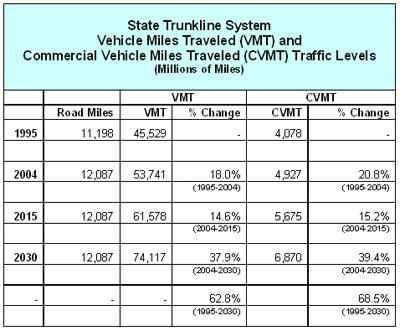 While this statistic does not tell the whole story, it is one indicator that suggests a need for future investment in new capacity. On the other hand, it is hard to say whether VMT continued growing between 2004 and 2007, and whether it will continue growing in the near future given the forces affecting the Michigan economy. The other problem with this measure is that it does not address peak hour traffic growth. Most regions have plenty of road capacity at non-peak hours, the question about the need for additional investment really relates to the growth in peak hour traffic, and peak hour traffic does not necessarily grow at the same rate as annual VMT.