The level of current and immediate future spending on roads with current resources, and trends in that funding, are another good indicator of the potential need for additional funding. Are we maintaining our recent past and current level of spending on roads? Michigan’s latest five-year plan, depicted in Figure 15, shows a considerable drop-off in planned spending over the next five years.[80] For 2007, MDOT is scheduled to spend $1.624 billion on the state owned trunkline highway capital improvement program including maintenance. However, by 2008, planned spending drops to $1.336 billion, with spending falling further to $1.229 billion by 2011. 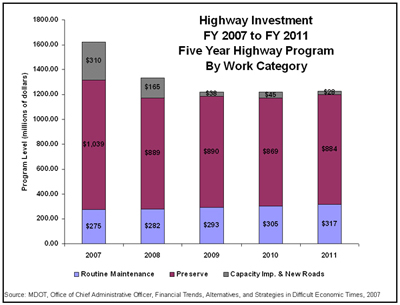 However, while the planned spending fall-off is troubling enough, new data indicates that this five year spending plan is under-funded to the tune of $300 million over the five years, partly because of an anticipated $157 million reduction in estimated federal aid. That means that the planned spending will need to be cut back by that amount unless federal funding or bonding is increased.[81] If the $300 million has to be cut from the last four years of the plan, that will mean an average spending level of $1.176 billion, or a 27.6 percent reduction from 2007. Even before the potential $300 million reduction, the capital preservation and expansion part of the plan excluding maintenance, was down 32.4 percent in 2011 as compared to 2007. Spending is down by even more if one compares the capital program to 2006, when spending was boosted to $1.523 billion with the aid of bond monies. Comparing 2006 to even 2008 levels indicates a 38 percent drop in true capital spending.

Perhaps even more ominous is the severe reduction in expansion money in the five year plan. Expansion money is used to add capacity. The capacity expansion money has the biggest, and perhaps even the only real productivity boosting economic impact in the program. While Michigan is spending a relatively small amount on expansion in 2007, just $310 million, it is scheduled to decrease this to $165 million in 2008, and then drop the expansion to between $28 and $45 million for each of the 2009 through 2011 years. And the $300 million under-funding of the plan will have to be taken out of even these minimal amounts if federal funding is not restored and state MTF revenues do not increase. Such limits on expansion spending will have a very detrimental impact on economic development and must not be allowed to stand. Michigan simply must find a way to begin building new highway lanes in congested areas. The lack of any significant highway expansion will place a cap on the state’s ability to grow in high demand areas such as Oakland County and western Michigan.