Several organizations have produced reports on the condition of Michigan pavement in recent years. These include MDOT, Anderson Economic Group and The Transportation Improvement Program (TRIP), a road-builder funded organization.

MDOT has said that the condition of the statewide trunkline system pavement has steadily improved over the last 10 years, from 64 percent “good,” to 86 percent good in 2005.[70] This evaluation system is based on MDOT’s Remaining Service Life (RSL) estimates. The system takes into account not only existing pavement condition but also the rate at which a given piece of pavement is expected to deteriorate. MDOT assumes that pavement sections with remaining service life of greater than 23 years are in “good” condition. However, while MDOT believes this system to be the best method to use for its internal purposes, they acknowledge that it may be hard for the public to relate to because it does not focus exclusively on existing pavement condition. MDOT also monitors International Roughness Index (IRI) data that is reported by TRIP and which is included in the FHWA Annual Highway Statistics reports. The IRI data indicates that pavement condition is in worse shape than what is determined from using MDOT’s RSL system. It is also important to note that most local governments use a completely different system recommended by the Michigan Asset Management Council. This PASER (Pavement Surface Evaluation and Rating )system relies on a visual survey of pavement condition and a 1 to 10 rating with the rating relating to the type of roadwork that will be needed.

In essence, the RSL measures how good a shape the base is in, as well as the surface condition. This is a better measure of how much service life the road has left. While the IRI measures the surface roughness – a measure that makes more sense to the public. However, the IRI is not a good measure of the true condition of the road. For instance, MDOT could easily take the “easy way out” and get all the roads up to “good” IRI condition by putting a cheap two-inch cap on all roads. But in the meantime, the underlying life of the sub-surface and base could be rapidly deteriorating and require millions of dollars of reconstruction. So the IRI under-reports the true underlying road conditions and life, but the RSL under-reports the actual quality of the ride. Overall, MDOT’s RSL measure is the more appropriate one for studying future funding needs. 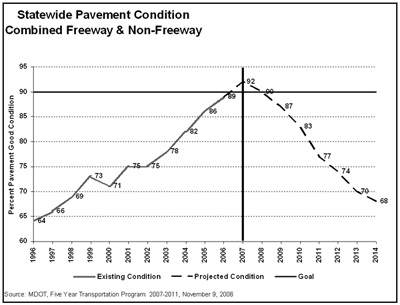 Anderson Economic Group was retained by the Speaker of the Michigan House of Representatives to evaluate various aspects of Michigan “infrastructure” and to compare our performance on those infrastructure elements to other states. Four key types of infrastructure were evaluated: Transportation, utilities, telecommunications, and natural resources or “green” infrastructure. Anderson used FHWA reported International Roughness Index data that is based on the “number of inches per mile that a laser jumps as it is driven across a road.”[71] IRI scores of less than 95 were assumed to equate to “good” roads, between 95 and 170 equals “fair,” and anything over a 170 means the road is in “poor” condition. Both state trunkline and county/city roads were studied. A key advantage of using this data is that Michigan road condition can be compared to other states. The report compared Michigan roads to a Midwestern average including the states of Illinois, Indiana, Iowa, Michigan, Minnesota, Ohio and Wisconsin.

The Transportation Improvement Program (TRIP) issued a report on Michigan road conditions in February 2006.[72] The TRIP report evaluated state, county and city road and bridge condition, along with congestion levels, using 2004 data. TRIP found that some 14 percent of Michigan’s major roads are poor vs. 13 percent nationally, with 24 percent fair in Michigan compared to 21 percent nationally. They also report that just 47 percent of Michigan’s major roads are in good condition, substantially below the 75 percent good standard that they say state and local organizations strive for. For bridges, they report that 16 percent are structurally deficient, meaning there are major system components with deficiencies. Nationwide 13 percent of bridges are considered structurally deficient. TRIP also reported road conditions for key urban areas of the state. They found that 36 percent of major roads in the Detroit area were in poor condition, with just 23 percent good. In the Grand Rapids area, they state that 28 percent of major roads are in poor condition.