As discussed in earlier sections, national construction costs for materials have gone up at a fast pace. Figure 16 shows these increases over the last three years. Michigan has lost a good deal of the purchasing power of its MTF revenue base because of highway construction cost inflation. Just in the last four years Michigan construction costs for key system components are up substantially. For instance, the costs for HMA are up 32 percent over four years, concrete is up 21 percent, sub-base is up 20 percent, and aggregate is up 29 percent. While these costs are going up, about half of MTF revenues, related to fuel taxes, are fixed dollar amounts which are not indexed to inflation. As a result the gas tax alone has lost some 42 percent of its value since it was raised to 19 cents per gallon in 1997.[83] Going back further in time, the impact of Detroit CPI inflation alone is quite stunning. 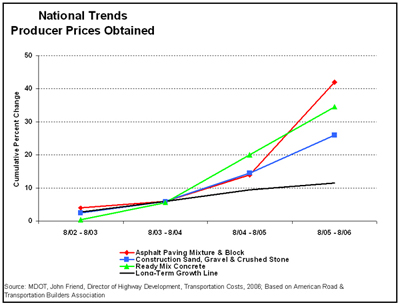