How Dewey got it wrong — again 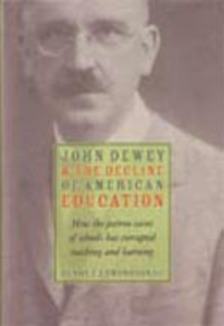 John Dewey & the Decline of American Education: How the Patron Saint of Schools Has Corrupted Teaching and Learning

If the title of Henry T. Edmondson’s book leaves any room for doubt as to his views on John Dewey and Dewey’s educational theories, the book’s subtitle should make clear Edmondson’s belief: Dewey’s lasting influence on the U.S. education system has wrought nothing but diminishing returns, if not all-out catastrophic results. Edmondson makes a compelling case that Dewey was far more interested in using public education for social reform rather than academic learning, and in placing students’ vocational concerns above encouraging a traditional liberal arts education.

Edmondson, a professor of political science at Georgia College, enlists the wisdom of a host of Western civilization’s greatest thinkers — including Aristotle, St. Thomas Aquinas, Thomas Jefferson and Benjamin Franklin — as well as such diverse writers of the past 100 years as Flannery O’Connor, J.R.R. Tolkien, Allan Bloom and G. K. Chesterton, to bear on what he considers recklessness wrought by Dewey’s educational reforms.

Lest mention of these writers cast the author as a right-wing crank who disparages all progressive reform, Edmondson also takes issue with the No Child Left Behind Act, and writes in favor of educational innovation, which he believes "builds upon traditional processes and a recognized canon and designs new and dynamic ways to teach that material." Innovations promoted by Edmondson include freeing teachers from paperwork so they may actually teach, school vouchers, and charter and magnet schools.

Readers delving into Edmondson’s brief book (114 pages) may not find as detailed an evisceration of Dewey’s pedagogical theories as previous works by Charles Sykes and Diane Ravitch, but will find instead an interesting gloss of how an entire nation yielded to the whims of a man whom Edmondson depicts as attempting merely to further his personal agenda against authority, history and traditional teaching methods, rather than to improve the cultural and civic welfare of the nation’s students. The arguments may not be new, but they certainly bear repeating.