DPS enrollment down by thousands

Many Detroit students still unaccounted for 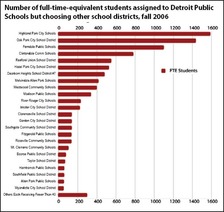 Education officials try to track where students are today

Detroit Public Schools enrollment dropped by about 13,800 students from the fall of 2005 to the fall of 2006, but where are those students today? Enrollment figures from nearby public school districts and charter schools account for nearly 4,000 of the students, but the rest remain a puzzle that education officials are still putting together.

"Everyone wants to know," said Beverly Rebel Finlayson, manager of Student Accounting & Auditing at the Wayne County Regional Educational Services Agency. That agency tracks student population for 34 public districts and nearly 80 public school academies in Wayne County. The agency keeps records on the total student count in each district as well as the number of students who live in one district but attend school elsewhere. The number of students who left Detroit Public Schools for charter schools or other public schools inside Wayne County grew by about 5,300 this year, and an additional 600 now attend schools in Oakland, Macomb or Washtenaw counties, records show.

"We cannot determine where approximately 8,500 Detroit resident (students) are" as of early January, Finlayson told Michigan Education Report, but she listed several possibilities. Some of the Detroit children may be attending charter schools outside the county, she said, and some may have moved elsewhere in Michigan or out of state. Finlayson has requested regional and statewide school population data to help her track the Detroit students. Based on its own analysis of enrollment figures, The Detroit News reported in mid-January that 5,000 students left DPS in favor of charters and other public schools in Metro Detroit from 2005 to 2006.

Detroit Public Schools itself tracks the students "the best we can," said spokesman Lekan Oguntoyinbo. "Our information shows a large percentage end up in charter schools … and neighboring districts." He said the district lost students to the Oak Park School District in Oakland County last fall, when approximately 7,000 DPS teachers went on strike for 16 days. The illegal strike denied instruction to students for several days. Classes resumed Sept. 14. Student count day — the date when school districts took an official count of all children in attendance — was Sept. 27.

Recent news that the district might close more than 50 school buildings in the next two years prompted predictions of even further enrollment decline. Superintendent William F. Coleman outlined the proposal in January, saying it could save the district nearly $19 million a year in staffing costs. But at least one parent was quoted in the Detroit Free Press as saying that more students would leave the district if more schools close. The Detroit system has closed 35 schools in the past 10 years.

Oguntoyinbo said Detroit’s declining birthrate and population are a large reason for the enrollment drop. "The city is losing residents … and a lot of those residents are kids," he said. "By extension, the schools are losing population." The school closing plan "is an opportunity for us to right-size and to operate in a more efficient manner," he said. A large number of DPS buildings are operating at less than 50 percent capacity.

Charter administrators say it’s difficult to assess whether the increase is a reaction by parents to the teacher strike or a shift that parents had planned for some time. Some charter systems opened new buildings or added grades this year, and some attracted new students from districts other than Detroit. Some families also switched from one charter school to another.

Hanley International is a two-building charter school program in Hamtramck, where the number of students nearly doubled — from about 200 to about 400 — from 2005 to 2006. The new students didn’t come from Detroit Public Schools, according to business manager Nikki Doby. Between 90 and 95 percent of the Hanley students live in the Hamtramck public school district, and the large enrollment increase is due to the opening of a second building and adding one grade, she said.

"What I saw were sprinkles here and sprinkles there" of Detroit students moving to other schools, she said. She also pointed out that some students may have returned to the Detroit district, but not in time for the official count. "Those kids may be there," she said.

Oguntoyinbo agreed, saying, "We do have quite a few students coming back," although exact numbers were not available.

At the Aisha Shule/W.E.B. Dubois Preparatory School, a charter school in Wayne County, what looked like a 600-student increase turned out to be a mistake in the report, according to registrar Shamayim Harris. The numbers for Aisha Shule apparently were transposed with those of another school, but the figure has since been corrected, she explained.

Harris estimated that about half of her school’s new enrollees this year – or about 50 students – came from the Detroit Public Schools system. Others came from other public districts or other charter schools. Harris said a few parents contacted her school in reaction to the strike, "but not many. Some of them were a little frantic. They wanted their children in school." Most of those parents were added to the school’s waiting list, she said, since the available openings were taken by families already on the list.

At David Ellis Academy, officials do attribute part of the increase to the teacher strike. The academy operates one school in Detroit and opened a second campus this year in Redford. Looking at the locations combined, about 60 percent of new enrollees this year came from Detroit Public Schools and 40 percent came from other charters, according to Machion Morris, director of school operations. Regarding the DPS enrollees, "Because they enrolled at the last minute, we strongly believe that that was due to the strike," Morris told Michigan Education Report.

"They (charter schools) are full. They’re full and they’re looking for ways to respond, but their hands are tied," said Dan L. Quisenberry, president of the Michigan Association of Public School Academies. "There is room and demand for more quality schools. If a district can offer a higher quality program, parents will pick that. Thirteen thousand students left because they don’t have confidence Detroit (Public Schools) is or will offer quality any longer."

Quisenberry said his association’s Lansing office was overwhelmed with phone calls from parents during the teacher strike looking for schools with openings.

"It was very frustrating just to know you wouldn’t be able to help them," he said.

A number of neighboring public school districts also accept students assigned to the Detroit city district. In Dearborn Heights School District #7, about one-third of the school population consists of students who are assigned to Detroit, according to Cindy DeSmit, administrative assistant to the superintendent. The teacher strike did not affect the district’s enrollment directly because the open enrollment period, during which the district accepts schools-of-choice applications, had closed in April, she said. "There were parents calling to see if they could get their child enrolled," she said, but the district could not accept them. "We had pretty much met our (enrollment) goal."

In the Melvindale-Northern Allen Park school system, "We get students from quite a few districts," but the number of students coming from Detroit is not significantly higher than in previous years, according to Laudine Gallagher, secretary to the superintendent. The district’s overall student count is up by about 84 students this year, but most of that increase is among in-district students.

Highland Park regularly enrolls a large number of students from other districts, including Detroit, primarily because of its Career Academy. The number of full-time equivalent students at the career and technical center last fall was 1,079, according to spokesman Greg Byndrian. An additional 400 non-residents attend the district’s other schools, and the "vast majority of those are from Detroit," he said. Highland Park anticipated the possibility that the Detroit strike would send students its way, but "that did not happen," he said. There was increased activity in the school’s enrollment center after the strike ended, he said, but the district’s total enrollment this year is not expected to be much higher than it was in 2005.

In all, according to The Detroit News analysis, 51,000 Detroit students attend school elsewhere, equal to one-third of the student population. The number of students who have left Detroit Public Schools is larger than the student population in any other Michigan district. The second-largest district in Michigan, Utica, has about 29,500 students.

Wayne County population overall decreased by 80,000 people from 2000 to 2006, or nearly 4 percent, according to the latest "Population and Household Estimates for Southeast Michigan," published by the Southeast Michigan Council of Governments. SEMCOG uses U.S. Census figures and its own estimates, based on housing units, to compile the figures.

The city of Detroit alone lost about 86,000 people, or 9 percent of its population, according to SEMCOG, but communities like Canton and Northville townships gained as much as 28 percent, bringing down the overall population loss. The same report shows that while the number of housing units increased by 1.6 percent from 2000 to 2006, the vacancy rate increased from 7 to 10.6 percent.

Even as it downsizes, Detroit Public Schools is advertising in area media in an effort to attract students.

"It’s pointed at children still living in Detroit, but also children living outside the city," Oguntoyinbo said of the advertising campaign. "We want to attract more of them. A lot of people don’t know about our unique offerings. … This is an opportunity for us to continue to tell our story unfiltered."