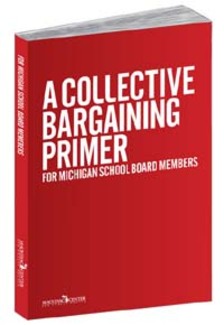 Collective bargaining is one of the most important, and frequently one of the most rancorous, aspects of Michigan education today. School board members at the bargaining table are expected to consider the educational needs of students, the welfare of school employees and the demands of the citizens who elected them.

"A Collective Bargaining Primer for Michigan School Board Members," recently published by the Mackinac Center for Public Policy, provides school board members with information critical to effective bargaining. Peppered with insights from experienced school board members and negotiators, the book explains current law and the roles of various parties during negotiations. It also suggests strategies for preparing better contracts.

When Michigan gave educators in public schools the legal right to organize in 1965, school employee unions quickly gained ground. As of 2007, all but one of the state’s conventional school districts had union contracts covering their certified teachers. Other groups, like custodians and administrators, followed suit. Today, under the terms of the Public Employment Relations Act, school boards are required to use the collective bargaining process to reach agreement with all union groups on key issues like wages and hours of employment.

"Most school board members come into the job with a willingness to learn, but little experience in industrial-style collective bargaining," Washburne says.

"Board members are dedicated people," agreed Lynn Parrish, deputy superintendent for personnel and labor relations and chief negotiator for Howell Public Schools. "They have the desire to do what is right, but it is a rare board member who has the training and experience that a chief negotiator — on either side of the table — has."

Parrish was one of the negotiators interviewed for the primer. Another was Donald Wheaton, vice president of the Lakeview Public Schools Board of Education. A 15-year board veteran, he described Michigan’s school board members as "5,000 individual people who are trying to do the best jobs they can."

"School board members need to hear all sides of every issue," Wheaton said. "More information can only be helpful."

The goal of collective bargaining, the authors note, is to reach mutual agreement on employment conditions though good-faith negotiations, rather than strife. In practice, school board members should be aware that contract negotiations in Michigan are often protracted and divisive.

The primer explains the Employment Relations Act as well as the role of the Michigan Employment Relations Commission in handling disputes. It also discusses which issues must be decided through bargaining and which may not — and why school boards need to be aware of all of their options when negotiating contract terms. "Good faith" bargaining, mediation and declaring an impasse are also addressed.

"Michigan law ultimately yields the authority to manage the district to the school board," Washburne said.

School board members are required to find a balance between the needs of the school system’s employees and its students, parents and taxpayers, the authors point out. But at the bargaining table, protecting the needs of students and taxpayers becomes paramount because employees are already represented by their unions. In most cases more than 75 percent of a school district’s revenue is at stake in the form of wages and benefits. School boards should be prepared, should adopt a unified strategy and should understand the goals and strengths of the unions before negotiations begin, the authors advise.

A well-informed school board member is an advantage during that process, Parrish said. "People who have some foundational knowledge always have ideas to bring."

The Mackinac Center is providing copies of the primer to every public school board member in Michigan. Copies can be ordered online.