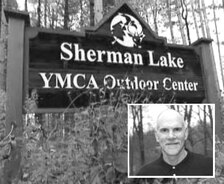 Luke Austenfeld, inset, is the executive director at the Sherman Lake YMCA Outdoor Center, near Kalamazoo.

Olivet College education students will spend time at a YMCA camp that focuses on character education as part of their student teaching requirement, the college has decided. The decision was made in January to require student teachers to spend time working with elementary students in the Integrated Education program at the Sherman Lake YMCA Outdoor Center near Kalamazoo.

Austenfeld and his staff developed and have promoted the program over a number of years with a goal of helping teachers integrate character values into the school curriculum. One way to do that is to work with teachers already in the classroom. But Austenfeld also is trying to convince colleges and universities to send education majors to his center as part of their student teaching experience. Olivet College is the first to agree.

The college already allowed its teacher candidates to earn credit at Sherman Lake, but in January the institution decided to make it mandatory, according to Norma Curtis, vice president and dean for academic affairs. "A lot of what they stand for is the same as what we stand for," she explained the decision. The teacher candidates from Olivet who have spent time at Sherman Lake "had a very rich experience. We’re really excited about it."

Olivet requires its teacher candidates to spend 14 weeks in classroom training. Curtis said she believes the seven weeks they will spend at Sherman Lake will help them become better classroom managers and give them a better understanding of how to help children develop life skills in addition to academic skills. They also will have direct teaching experience at the camp, she pointed out. "I don’t think there’s one major subject area that can’t be incorporated at Sherman Lake."

There are 32 state-approved teacher preparation programs in Michigan and about 7,500 new teachers are certified each year, according to the Michigan Department of Education. The state gives teaching institutions wide leeway to structure their own programs, according to Curtis, although the programs are subject to state review. Olivet currently has between 300 and 350 students enrolled in its education program.

The MDE conducts a review of each teaching institution every five years, according to Flora Jenkins, director of the Office of Professional Preparation Services. The state requires prospective teachers to spend at least 12 weeks in a directed teaching assignment under the supervision of a teaching institution, but some universities and colleges require more time of their students, she said.

Teacher training is also the focus of a new, state-level study group on teacher preparation programs. The Michigan Teacher Preparation Policy Study Group, formed in July, will make recommendations on the state’s review process and will study teacher testing policies and the grading of teacher preparation institutions, according to a press release announcing the group.

"Out motto is: Kids not only need to be smart. They need to be good, too," Austenfeld told Michigan Education Report. He says the evidence is clear that having embedded values in a school promotes academic achievement. But he said teachers don’t get much help achieving both goals in the classroom. Instead, they are under "a tremendous amount of pressure to meet national (test) standards," he said, while their principals are "overwhelmed by all the mandates."

Even if a teacher wants to incorporate character values into the curriculum, the commercial programs available are "almost entirely people trying to sell you posters," said Austenfeld, who studied the topic for his master’s thesis. Some programs suggest weekly character activities, but not many focus on character values as the starting point in a curriculum. Integrated Education does just that, he said, using the core values of honesty, caring, respect and responsibility. Austenfeld noted that those are "universal values, not religious values."

How would a teacher combine character values with an English lesson? According to the Integrated Education plan, the teacher would first explain the activity and then the class together would discuss how it relates to character. Next the class would carry out the activity and, finally, class members would discuss it. Teachers in the Sherman Lake program learn that technique along with the campers.

At Sherman Lake, most of the activities are hands-on, like canoeing or archery or art. So before students climb into canoes, they talk about safety and respect. "How are we going to be safe? We’re not going to tip each other," Austenfeld asked and answered himself. "How are we going to treat the equipment?" Learning is easier in an environment where children feel safe physically and also feel they will be treated with respect, Austenfeld said.

On the first day of camp, counselors and students "sit around and decide what the rules and expectations will be," Austenfeld said. "They know what’s right and wrong, and they’re their own rules." He advises teachers to have those same kinds of conversations at the beginning of the school year. "Setting the tone of the class at the very beginning dictates the whole year." In other words, he adds later, "what you permit, you promote."

Austenfeld, who taught in public schools for six years, has been executive director of the center for 12 years. He has a Bachelor of Science degree in education from Emporia State University in Kansas and a master’s degree in nonprofit leadership and management from Springfield College in Massachusetts. The center itself is a full-service YMCA that offers summer camps, retreats and year-round family recreation in addition to the school programs.

He does not have long-term empirical evidence on the academic effect of Sherman Lake Integrated Education, Austenfeld said, but teachers and principals tell him they have noticed improved student/teacher relationships, better test scores and fewer behavior problems since their students visited. The program has broad appeal, with 40 schools now participating, among them elementary, middle and high schools, public schools, public school academies and Catholic schools.

"The cool thing is, we have kids coming from every environment," Austenfeld said. At Sherman Lake, a student teacher would work with between 15 and 20 different groups of students from very different backgrounds over the course of seven weeks. The student teachers would learn to incorporate character education into lesson plans and would share ideas and experiences with other student teachers every day.

"They’ve seen it all," Austenfeld said of counselors who have worked at Sherman Lake and gone on to be teachers or principals. "I mean everything from bedwetting to whatever you can imagine. They end up seeing kids as kids."

The student teacher program at Sherman Lake would be in addition to, not in lieu of, student teaching in a more traditional classroom, he pointed out. "What they get here are all the soft skills about how to present a subject, and they would transfer those skills to other classes."

Carrie Abbott is a 2006 Olivet graduate who participated in the Sherman Lake program and is now certified to teach art in Michigan. Originally from Bad Axe, she said the Sherman Lake program helped her to hone her skills by teaching the same lessons over and over with different groups of children. She spent seven weeks there as a student teacher and then returned as a summer counselor.

"It was absolutely wonderful," she said. "There are different students and they need to learn different ways." Right now Abbott is working as a residence hall director at Olivet and also is the campus director of student organizations. She incorporates character education into her work with campus leaders in the same way she would in a classroom, she said, by talking about respect and caring.

One of her friends from Sherman Lake, who is now a fourth grade teacher, told Abbott she also is using core values in the classroom. "You have to be honest," Abbott quoted her friend. "You can’t cheat on tests. You have to be responsible. You can’t hit anybody."

That’s the kind of story that Austenfeld wants to hear. "It’s pretty hard to change minds, but it’s easy to shape them," he said. "We’re in the business of shaping minds."