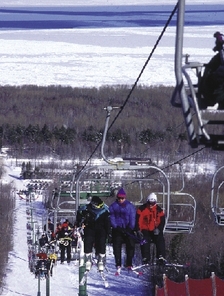 The state of Michigan contracted with a private, for-profit company to manage the ski area it owns in the Upper Peninsula. The contract is expected to save taxpayers as much as $200,000 during the 2003-2004 ski season.

In 2002, Michigan Privatization Report brought the first public attention to the fact that the state of Michigan was operating a ski area at the Porcupine Mountain Wilderness State Park. The park is located on Lake Superior in Ontonagon County in Michigan’s Upper Peninsula, and competed with three privately owned areas in nearby Gogebic County. (See “Privatize the ‘Porkies?,’” MPR, July 2002, and “No Business in Snow Business,” MPR, October 2002).

The cost of operating the ski area was a continual financial drain on the state budget, and in 2001 the state had even considered a partial closure of the hill. MPR recommended that Michigan sell the Porkies outright — but that the second best option would be to contract out management to a private company.

In June of 2003, stopping short of selling the resort outright, Michigan’s Department of Natural Resources (DNR) solicited bids for a private operator. So what’s happened since?

Initially, the prospect of change brought some fear to western Upper Peninsula residents, who thought the Porkies might change drastically under private management, or worse, close altogether. Some feared privatization would effect their employment.

Shortly after the DNR sent out requests for proposals, Sen. Mike Prusi D-Ishpeming, inserted an amendment to the DNR budget requiring the department to prepare an economic impact statement. That is, Prusi wanted a study that would detail the positive or negative effects of privatizing the hill. This was likely a political move simply to slow down the move to privatize. He touted his amendment by saying “My amendment requires the continued operation of the ski area through the next season should the DNR require additional time to find a lessee.” If his amendment had passed, the economic impact study would have lasted through the 2004 ski season, mandating that the state continue to run it at a loss for one more year. Fortunately, the amendment didn’t pass.

Besides, legislative delay was not necessary. In October, the DNR announced that it had found a way “to preserve the skiing opportunity in light of ongoing state budget constraints.” It awarded a one-year contract to Porcupine Mountain LLC, a private, for-profit company that was created for the purpose of managing the ski area. The company was put together by the same people who own and operate neighboring Mt. Bohemia. The contract is expected to save the state as much as $200,000 in 2004. Lowen Schuett, who was at the time the acting chief of the DNR’s Parks and Recreation Bureau, said that contracting out let the department “focus its resources on the DNR’s core mission,” rather than waste taxpayer dollars on a money-losing ski resort. Negotiations for a 15-year contract are ongoing.

The transition from reliance on a state subsidy to reliance on skier demand involves some trade-offs. The 43 kilometer cross-country trail system, for example, is not groomed as frequently or as extensively as it was when the presence of actual skiers made no difference to the bottom line. While cross-country skiers can now use the trails for no charge, some argue that the system is now unusable. There has been some talk of local skiers taking over grooming.

Also, Porcupine Mountain, LLC has shortened operational hours and de-activated one of the lifts on weekdays to put the resort’s operations more in line with current skier demand.

But to increase that demand, the management has set up a new web site, and within days of winning the contract, printed 20,000 magazine inserts touting the hill and its features. Also, it has run television commercials in markets as far away as Wisconsin, something the state never did.

Another new promotion, “the Rubber Ducky Challenge,” invited skiers and snowboarders to find rubber ducks hidden throughout the hill, with a top prize of $5,000 for finding the most ducks, said the Porkies’ new manager, Lonie Glieberman. “There are many people throughout the Midwest who intend to try the Porkies, and we want to make it especially attractive for them on Feb. 15 — the day of the challenge — to give us a try,” he said. The top prize was actually won by a member of the local “Friends of the Porkies” organization.

The new arrangement also means the resort’s managers can experiment with innovative marketing strategies. For example, people who took advantage of a special pre-season sale could buy a season pass for only $99. The move increased the sale of passes approximately 12-fold. It’s also possible now to buy a season pass good for both the Porkies and Mt. Bohemia, which is also run by Glieberman, but is owned by a different firm.

While children under 9 must now have a paid lift ticket, a family of four who bought the discounted tickets could actually save money over the previous season. Nearby Indianhead resort offers free lift tickets to children 6 and under, so perhaps competitive pressure will bring a change over time. The discounted pass also encouraged destination skiers — skiers who aren’t locals — to come more often, a move that could benefit other merchants in the region.

Jim Bradley a resident of nearby of Ontonagon since 1976, and president of Friends of the Porkies, gives Porcupine Mountain, LLC, mixed marks. He says “management has been finding its way” in what hills should be groomed and when. Previously, he says, the state groomed on a set schedule, regardless of the snow conditions. He faults the new management for not grooming enough during the week, when attendance is sparse. “When it snows as often as it has this season — 32 days in a row — you will have a problem if you slack off in the middle of the week,” Bradley said.

On the other hand, some of the new practices have added variety to the terrain. One trail, for example, is turning into a mogul run now that it is not being groomed, something Bradley says “was probably a good decision.” Moguls are a series of small and solid snow hills covering the larger hills. Skiers enjoy moguls because of the added challenge they represent. Many skiers consider powder (new snow) to be the best snow for skiing, and a less automatic schedule for grooming allows the powder to linger. Powder was often eliminated under the state’s rigid grooming regimen.

As for the future, Bradley hopes to see more chair lifts and some snowmaking equipment added. Unlike other ski areas in the region, the Porkies has no snowmaking capacity, meaning that the hill has often had to be closed during the vital Thanksgiving-to-New Year’s season. Given the sudden popularity of snowboarding, there may eventually be room for a “halfpipe” run. Halfpipes are narrow runs with sides of snow that are highly banked so snowboarders can do dramatic twists and turns as they make their way down the hill.

Of course, purchasing, installing, and running snow guns costs a lot of money, as does laying new pipes. Acquiring the required permits from various government agencies could be a lengthy, expensive task. Finally, it’s not clear that even a 15-year contract is long enough to allow any private operator enough time to recoup the substantial investment required for snowmaking. The U.S. Forest Service, by contrast, typically offers 40-year leases for ski operations in the western United States.

The point is that consumer demand is now in the driver’s seat, and according to Glieberman, the prospects are looking good. “We’re excited,” he said. “It’s going well, expenses are lower, revenue is up, and season pass sales are phenomenal. We are on track to grow the numbers; it’s a long-term proposition. We can make a difference for the taxpayers, too.”

It’s possible that the western U.P. is oversupplied with ski area. There already are three privately owned and operated facilities in Bessemer and Wakefield, not too far from the Porkies. If that’s the case, there’s no reason for the taxpayers of the whole state to be on the hook for the pleasures of a few. Thanks to the state’s new contract this season, they won’t be.

Frequent Mackinac Center contributor John R. La Plante is a native of Muskegon and a graduate of Kalamazoo College. He is a skier and creator of a web site (graysontrays.com) dedicated to adults learning how to snowboard.