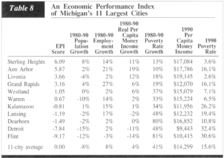 In a 1992 study for the Cato Institute, we devised an index for assessing the economic well-being of the largest U.S. cities.[9] We then correlated this index to taxing and spending behavior in these cities. We found that high taxes and spending affect economic growth of cities in a significantly negative fashion. For example, we found that for every $1.00 of per capita expenditures (excluding dollars spent on anti-poverty programs, education, and health care) in the highest growth cities, the shrinking cities spend $1.71. As a result, in 1990 a typical family of four living in one of the shrinking cities paid $1,100 per year more in taxes than it would have had it lived in one of the highest growth cities. We now address the question of whether this inverse relationship between taxes and spending and economic growth is also observable in Michigan cities. 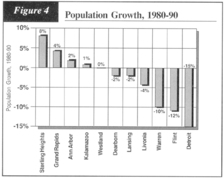 To assess the economic performance of Michigan's 11 largest cities we examined the same six measures of economic health that we used in our above-mentioned national study. The measures used are 1980-90 changes in population, employment, per capita money income, and poverty rate; and the 1990 levels of per capita money income and the poverty rate. These figures were used to calculate an economic performance index which is shown in Table 8.[10] Figures 4-9 show the performance of the 11 Michigan cities on each economic measure.

Table 9 also presents a measure of "tax effort" for the 11 Michigan cities.[11] The tax effort index compares the tax rates, rather than revenues, for cities. A tax effort of 1.00 is the average tax effort for cities in Michigan. Hence, a tax effort of 2.0 would mean that the city has twice the tax burden of the average city. The tax effort data further confirm the conclusion that taxes are very high in Michigan's declining cities. Of the five declining cities, only Dearborn's tax effort is even close to the state-wide average. Tax rates are more than 50 percent above the Michigan average in Flint, Kalamazoo, and Lansing. Incredibly, Detroit's tax effort is a six times above the average. Herein lies a major source of economic decline.

As Table 10 indicates, taxes and spending were significant-ly higher in the declining cities for every one of the six individual economic growth measures examined. For example:

In sum, Michigan cities with booming economies tend to have much lower levels of taxes and spending than those in decline. This is similar to the national pattern with cities. Few would argue that the quality of municipal services in the declining cities of Michigan is twice as high as in the prosperous cities. Most would say just the opposite – that services are better in the low-cost cities.

The critical policy question is this: are the higher levels of taxing and spending in the declining cities contributing to that decline or are they a consequence of that decline? Most urban theorists say that it is the latter. The traditional argument is that low-growth cities spend more than high-growth cities because their needs are greater. They claim that such cities must spend more for anti-poverty programs, homeless assistance, drug rehabilitation, crime control, and job training, among other things. Since declining cities have less wealth and fewer workers and businesses to pay the costs of those programs, those cities have to impose higher tax burdens on their residents and businesses just to raise the same amount of revenue as high-growth cities do. In sum, higher spending and taxes in low-growth cities are alleged to be purely symptomatic of urban decline.

This study and others cast some doubt on that claim.[12] We believe that conventional wisdom does not tell the whole story. We contend that the evidence shows that high taxes and spending are both cause and consequence of urban decline. Remember, city public welfare spending is not included in the spending figures in this study, so they cannot be driving low-growth cities' expenditures upwards. Furthermore, if urban decline necessitates higher city spending, is it not unrealistic to expect that higher spending to bring about more acceptable conditions? In other words, if more spending is the cure, why do the big spending cities continue their spiraling decline?

One way to test whether higher taxes and spending are a cure or a cause of urban decline is to look at the levels of taxes and spending in the high-growth and low-growth cities at the beginning of the period of analysis, 1980. Table 11 does just that, using the economic performance index score described earlier.

Looking at the various measures of economic growth individually shows the same correlation between high spending and urban decline. As Table 12 indicates, for every economic variable used, the spending and taxes at the beginning of the period were higher in the cities that subsequently declined than in those that grew.

If big spending were the cure for urban decline, Michigan cities such as Detroit and Flint would be thriving. Instead they continue to tax and spend at levels well above those of other more prosperous cities in Michigan, and sadly they continue to experience the pain of economic stagnation.

The data shows convincingly that cities in Michigan, like cities elsewhere, cannot tax and spend their way to prosperity. In fact, it is those cities that have high tax burdens and excessive spending that are experiencing the worst economic despair.

If taxing and spending are not the keys to economic prosperity, what are Michigan's city leaders to do?