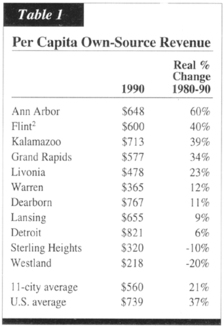 Table 1 indicates Michigan's cities were quite varied in their levels of tax revenues and the direction of change of those levels from 1980 to 1990.[1] Both Detroit and Dearborn had per capita tax burdens above the national average as shown in Figure 1.[2] Sterling Heights, Westland, and Warren, were each more than 30 percent below the U.S. average for city own-source revenue collections.

As important as the level of taxes is, the change in tax burdens in cities is even more so. Where is the per capita tax burden growing the fastest? Table 1 and Figure 2 show: 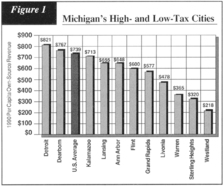 Property taxes are one of the most politically volatile economic issues in Michigan. Governor Engler's decision to sign legislation in August 1993 abolishing property taxes for schools focused national attention on the sky-high rates in Michigan.

Table 2 shows the 1990 level of per capita city property tax revenues for Michigan cities. The data shows that property taxes were at least 25 percent above the U.S. city average in Dearborn, Ann Arbor, and Warren. In the case of Warren, the property tax is the only major tax imposed locally.

The state of Michigan spends about $6.5 billion per year on financial aid to its cities.[3] Where does the money go? Table 3 shows that: