II. City Government Spending in Michigan in the 1980s 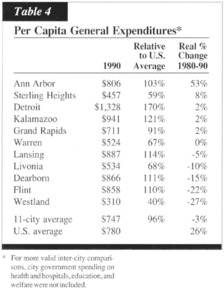 Michigan cities did a good job of holding the line on spending during the 1980s. As Table 4 shows, per capita general expenditures were cut by 3 percent in real terms in Michigan's 11 largest cities during the 1980s.[5] The national average rose by 26 percent. Only Ann Arbor raised per capita spending faster than the national average, at 53 percent. 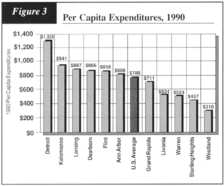 Despite only a modest 2 percent real per capita increase, Detroit's spending was still almost double the national average. In 1990, the city spent nearly $400 more per resident than the next biggest spending city in Michigan, Kalamazoo.

One core service of city governments is keeping the streets and neighborhoods safe through police protection. Table 5 shows how per capita spending on police protection in Michigan's largest cities changed during the 1980s.[6]

The average U.S. city increased spending on police protection from $92 per resident in 1980 to $119 per resident in 1990, in real terms. The corresponding numbers for Michigan's large cities were $117 and $142.

Only two of Michigan's cities increased spending on police protection faster than the rest of the nation. Ann Arbor hiked such spending 37 percent. Kalamazoo did so by 113 percent. Kalamazoo's per capita increase of $126 from 1980 to 1990 is more than the average U.S. city and all but four of Michigan's largest cities spent on police protection in 1990.

Two cities – Flint and Grand Rapids – actually reduced real per capita police spending, and two others – Warren and Lansing – saw growth that was a fraction of the national average.

Michigan cities had administration expenditures well above the U.S. average. In 1990 only two of Michigan's 11 largest cities – Westland and Warren – had per capita levels of administration spending below the national average.

Finally, Table 7 examines levels of city borrowing. Specifically, it shows the per capita amount of debt outstanding, which includes all debt obligations remaining unpaid on the date specified.[8]

However, the average distorts the true picture. Four cities – Sterling Heights, Grand Rapids, Lansing, and Kalamazoo – increased per capita debt by more than 75 percent. Meanwhile, four other cities – Warren, Dearborn, Westland, and Livonia – cut per capita debt by over 30 percent.

Five cities – Kalamazoo, Detroit, Grand Rapids, Lansing, and Flint – had 1990 per capita debt levels of over $1,000, while four others – Warren, Westland, Sterling Heights, and Dearborn – had levels near or below $200.