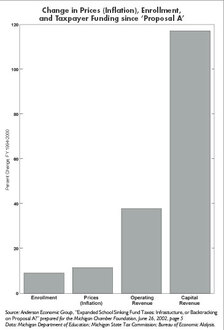 Legislation that would liberalize the allowable uses for school sinking funds (House Bill 4824) could cost Michigan taxpayers nearly $5.5 billion over the next 10 years, according to a new study sponsored by the Michigan Chamber Foundation and conducted by Anderson Economic Group, a Lansing-based consulting firm. The new law would allow an additional five mills in local property taxes to be levied for sinking fund programs.

Sinking funds are a way to set aside money to repay principal on a debt when a lump sum comes due. Under current law, schools can maintain permanent sinking funds for future capital projects, like buying real estate, constructing new buildings, or repairing existing structures. These funds also allow schools to have money on hand for emergency repairs, such as replacing a leaky roof.

Under current law, sinking funds cannot be used for regular school operating expenses. The new legislation, sponsored by Rep. Doug Hart, R-Rockford, seeks to change this. In addition to the current allowable uses of sinking fund monies, these resources could be used to furnish buildings, purchase school equipment, and acquire technology. These costs would normally be paid out of general operating funds.

According to the Michigan Chamber Foundation study, HB 4824 would “increase the taxing powers of local school districts beyond those allowed when Proposal A passed…. For businesses and other taxpayers paying 18 mills in local taxes plus six mills in state taxes now, a 5-mill increase would represent more than a 20 percent tax increase.” Proposal A increased funding and established a per-pupil funding guarantee for Michigan’s public schools, and increased the state sales tax. It also reduced per-pupil funding disparities between districts.

“The increased flexibility in the use of sinking fund revenues under this proposal could result in the approval of more sinking funds and thus increase property taxes for residents approving these proposals,” writes Joe Carrasco, Jr. Carrasco wrote a fiscal analysis on the bill for the nonpartisan Senate Fiscal Agency last February.

These concerns notwithstanding, HB 4824 enjoys broad bipartisan support. Both gubernatorial candidates, Dick Posthumus and Jennifer Granholm, support some expansion of allowable sinking fund uses. On Dec. 13, 2001, the bill passed the House 95-2. Also, the proposal has the support of influential education organizations, such as the Michigan Association of School Administrators.

The study underscores how much capital revenue for schools has skyrocketed since passage of Proposal A. Capital revenue includes both sinking funds and the proceeds from other bond debt for building and site expenses. Since Proposal A was enacted in 1994, capital revenue has more than doubled. Meanwhile, operating revenue has grown by less than 40 percent, and general price or inflationary changes have been far less than 20 percent (see graph).

The bill has moved to the state senate, and it has been referred to the Senate Education Committee, chaired by Sen. Loren Bennett, R-Canton.